Shout Out Louds Announce New LP 'House', Stream "As Far Away As Possible" 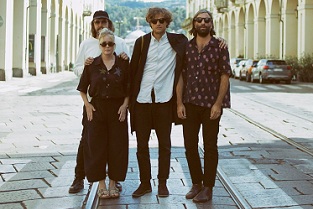 Produced by our old pal Björn Yttling (Peter Bjorn & John) and recorded in Stockholm last year, the album will be out February 18 2022 via Bud Fox/Integral/[PIAS].
From the band: “When it came time to record these songs, we took them from our small underground rehearsal space to Ingrid Studio in Stockholm, to work once again with our friend Björn Yttling – who is the master of getting rid of anything unnecessary – in pursuit of the sound of the night.  We were determined to maintain the raw simplicity we found when writing these songs, that up-close and intimate feeling. Like being at home, safe and warm in a small room with friends. Devoid of multiple layers and illustrious decorations, the songs are what they are – stripped back, honest, and bare. When someone shifts position, you hear it. An exhale? It’s there. Wide-open sounds and an intimately personal perspective meet in this album. And together they create ‘House’.”
“‘As Far Away As Possible’ had to do with that sensation of being stuck, of longing for a break from the hum-drum of the day-to-day,” noted the band, in regards to the albums’ opening track and lead single. “Maybe a drink, a night out, a simple slip out the back door. Or something more. Anything really. Anything other than this. By dreaming of being as far away as possible, this song shines a light in the expansive darkness.” Feelings most of us can relate to after 18 months of lockdowns, closures, and travel restrictions.

Watch the video for new single "As Far Away As Possible" below. 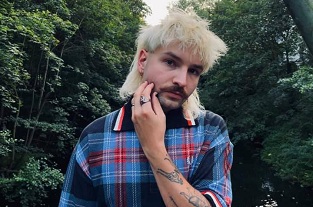 Hamburg-based electro/wave DJ/producer Johannes Haas aka L.F.T. has unveiled his new single "Smell Of Metal".
The song is taken from his forthcoming sophomore album 'Salz', which will be available on November 12 through Mannequin Records. Pre-order your copy here.
Haas is obviously one of the resident artists at Golden Pudel Club, being blessed by a collaborative friendship with the mighty Helena Hauff, and also running also the label 'Neoprimitive' with Lukas, focusing mostly on experimental music.
Pursuing a stubborn D-I-Y aesthetic with an extensive use of lo-fi technology, over compressed drum machines and tapes, over the last two years L.F.T. has released several records on different labels like Helena Hauff's Return To Disorder and Elena Colombi's Osaré Editions
Endorsing a distinctive contemporary sound, 'Salz' is moving forward to an highly authentic mixture of electro and synthwave, with a lo-fi analog power blended all over his tracks, somewhere between Liaisons Dangereuses, I-F and Bakterielle Infektion, bringing us back - and fresh as never before - the amazing early days of CBS Radio - now Intergalactic Fm. 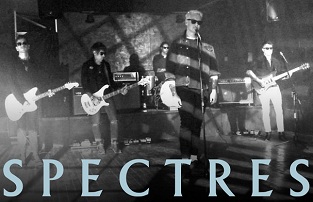 Vancouver, BC post punk/cold wave/goth band SPECTRES have premiered their new single "To the Victor".
The song is taken from their upcoming new studio album 'Hindsight', set to be released on on November 5 via Toronto-based Artoffact Records, featuring . Pre-order your copy here.
Stream it below. 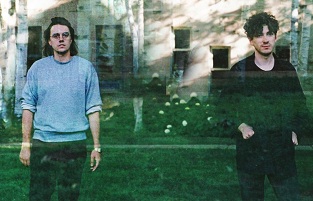 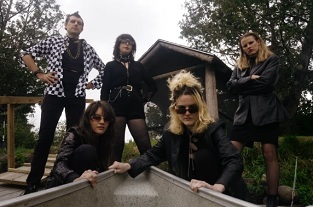 Brooklyn-based art-punk/post-punk quintet Gustaf have shared the video for their new single "Cruel".
The song is taken from their debut studio album 'Audio Drag For Ego Slobs', out today, 1st October via Royal Mountain Records. Grab it here.
Speaking about it, vocalist Lydia Gammill has said: “When I started working out the lyrics for cruel, I liked the idea of someone getting mad at the sunlight for shining through their window. I wanted to play with the idea of someone victimizing themselves over a blessing. Ultimately ‘Cruel’ became a ‘love’ song — or as it goes with a lot of Gustaf songs, an anti-love song.
“The protagonist in ‘Cruel’ is unfairly upset at someone who gave them a glimpse of a good thing and then took it away. Now they’re left obsessing over the thrill of what could have been. They were content with what they already had, but once they knew something more was possible they became indignant over losing it. Selfishly musing that if they knew it would be like this, they would’ve rather not had the thing at all.” 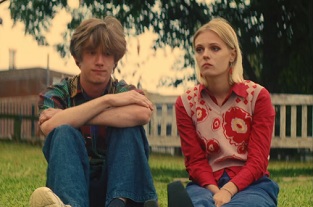 Hitchin indie rock/pop band second thoughts have released the video for their new single "joyrider".
The song is taken from their forthcoming EP 'dog days'. Get it here.
Watch/listen below. 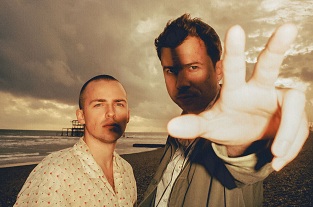 London indie pop/electronic/alt band APRE have dropped the video for their new single "You".
From the duo: "This is our favourite song to date - It was the first song to come easily in a long time while we were hauled up in a house in cornwall and it was the first song that started the journey that turned into our future mixtape 'a001' - Its about a real tough patch both of us had earlier this year when everything in our lives changed in a flash - Dance around your room naked with your dog and his cousin to this one, we fucking love it!"
Get the song here and watch the video below. 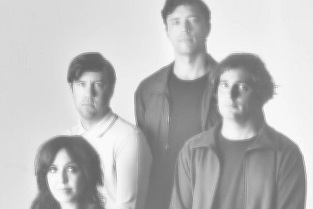 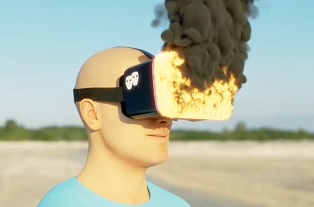 The song serves as the title track of his upcoming album 'Faceless', set to be released on October 15. Pre-order it here. 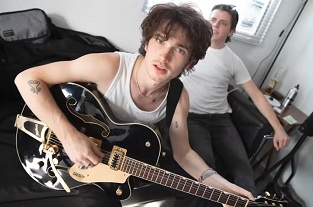 Dublin rock n roll four-piece Inhaler have unleashed a new video for "My Honest Face".
The song is a classic here on Kool Rock Radio and is taken from debut album 'It Won’t Always Be Like This', released in July this year via Polydor Records. Grab your copy here.
From the band: This song has been with us as long as we can remember being a band. The title always meant something special to us, but even more so in recent times. Six words to hang on to, holding out for better days. We hope you love it as much as we do - It Won't Always Be Like This, song and video out everywhere."
The video features footage from their recent shows and festivals. Watch it below. 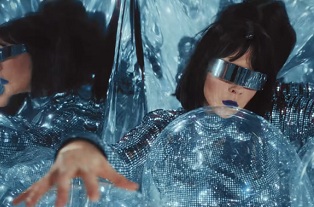 Tampa indie rock band Glove have unveiled the video for their new single "Modern Toy".
The song is taken from their forthcoming new album 'Boom Nights', out later this year. Get it here.
Sung by drummer Brie Deux, it’s a dynamic video featuring Brie in all her Tron-esque electro-glory. “‘Modern Toy” refers to the dark underbelly of Hollywood, says Deux. The song slowly creeps up and starts revealing the frustrations and alienation within the entertainment industry. It all leads up to a full fledge lash out, where the industry has completely consumed the person and reveals they’re nothing but a prop. This can be interpreted in any industry or life and for anyone who is being used or treated unjustly. I dedicate this song to Britney Spears.”
Watch/listen below. 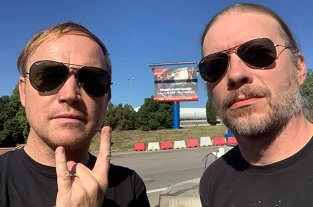 Danish post-punk band The Foreign Resort have shared the Creux Lies Remix of their song "Send Your Heart to the Riot".
The "uptempo new-wave melancholia" remix, is taken from their upcoming release 'OutRemixed', a collection of remixes and alternative recordings from their breakthrough album Outnumbered, set to arrive on November 19. Pre-order it here.

OutRemixed brings together remixes and other collaborations from Outnumbered, including remixes from Bootblacks, Creux Lies, Bootblacks, TRAITRS, Then Comes Silence, NITE and more! 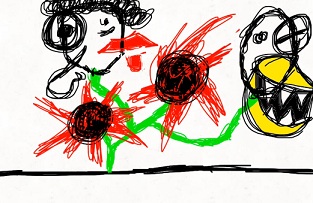 Stockport psych pop-rock band Fuzzy Sun have released the video for their latest single "Morning Light".
The song is part of our current playlist and is taken from their forthcoming new EP 'Since The Dog Died', which will be out in November. Buy it here.

Speaking about it, vocalist/guitarist Kyle Ross says: “Similarly to fake it and the whole EP, Morning Light follows a very similar narrative and thematic arc. It was the first tune we wrote out of this new bank of material."
“I suppose it's about feeling lost and at the same time losing a part of yourself whilst trying to figure a way out of your own mental labyrinth. I felt like I'd been trapped in a David Lynch scene and that’s what inspired the tune in the first place.”
“We wanted to make an impact,” he comments on making a pivot towards a neo-classic guitar sound, “pushing a new creative direction for the band, as I think we have really found a sound that excites us and we feel comfortable with.” He added. 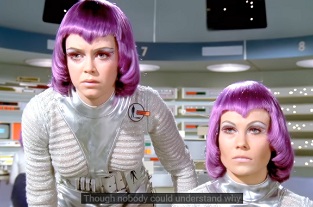 Melbourne electronic/synth pop project Parralox (aka John von Ahlen) has aired the video for his cover version of Human League's classic "The Black Hit of Space".

Parralox have produced a loving recreation of The Human League's classic 2nd album "Travelogue" using analog synths including Matrix Brute, Fairlight CMI30A, Sequential Circuits Pro One and Jupiter 8. Buy it here.
Time stops when you put it... Imagine it's 1981 and Martin Rushent and Giorgio Moroder produced Travelogue. What would that sound like?