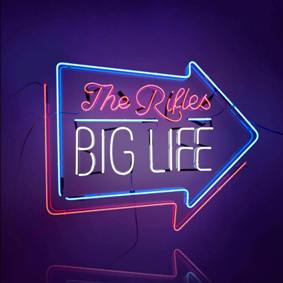 London indie rock band The Rifles have announced they will released their new album titled 'Big Life' on August 19th through Cooking Vinyl.

The follow-up to 2014's 'None The Wiser', and their first double album, was produced by regular Paul Weller associate Charles Rees, at Black Barn Studios.

About the decision to make a double album, singer Joel Stoker said: "It was just a case of having trouble picking the 11 or 12 songs for one album. There wasn't any that we wanted to leave off, so we decided to just throw them all on. It's just a case of giving our fans as much music as possible."

Pre-order the album here and get an instant download of their new single "Numero Uno", which you can stream below.

Trackilist:
01 Groundhog Day
02 Radio Nowhere
03 Turtle Dove
04 Numero Uno
05 Caught in the Summer Rain
06 Wall Around Your Heart
07 Victoria
08 Jonny Was a Friend of Mine
09 Young for a Day