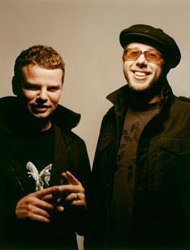 The Chemical Brothers are set to release the concert film 'Don't Think' on January 26th, for the first time, their entire live experience has been caught on camera.

Filmed on location at Fujirock Festival, the film is an accurate depiction of a Chemical Brothers live show and a tripped out salute to the duo's output. The first fully immersive concert film mixed in glorious Dolby 7.1, surround sound the band themselves have stepped in to oversee the final mixdown.

Director Adam Smith - who has worked with The Chemical Brothers for the last eighteen years - used the festival environment as an opportunity to explore some unique shots and angles, including following certain audience members during the set.