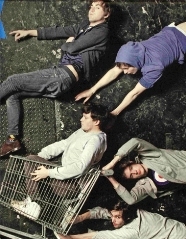 Brighton UK indie band, The Maccabees have announced that their new album 'Given To The Wild' will be released next year on January 9 (UK).

The band teamed up with producers Tim Goldsworthy and Bruno Ellingham (LCD Soundsystem and Massive Attack) to record the new album over the past year.

The 12-track album is said to be inspired by such acts as The Stone Roses, David Bowie and Kate Bush.

Check the traclist for 'Given To The Wild' below: