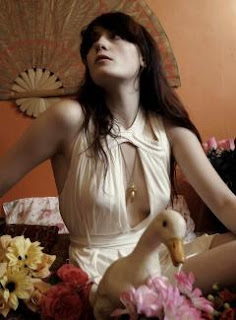 BRIT Award winning star Florence And The Machine is set to hand over a chunk of her songwriting royalties.

Florence And The Machine appeared to arrive fully formed in the Spring of 2008. A series of hit singles led to debut album 'Lungs' which went on to dominate the British charts.

Recently topping the countdown, the Mercury nominated effort later claimed a BRIT for 'Best Album Of The Year'. However recently the group have been dogged by accusations of copying Gang Gang Dance.

Florence And The Machine's track 'Rabbit Heart (Raise It Up)' bears an uncanny resemblance to 'House Jam' by Gang Gang Dance. The two tracks are so similar, in fact, that the Brooklyn group will now be credited on 'Lungs'.

The song was released without the knowledge of Gang Gang Dance, who only stumbled across the track after catching the video on late night television. Bringing to case to the attention of Florence And The Machine the band admitted using 'House Jam' as a blueprint for their own track.

"They did acknowledge the infringement and said that they were aware of it," according to Warp Records - home to Gang Gang Dance.

Meanwhile, Florence And The Machine insist that the track was meant as a homage to Gang Gang Dance and have apologised for missing them off the credits. "Yeah that's true, it's no secret. I've spoken about it in interviews before. I'm a massive fan of Gang Gang Dance and it was in homage to them" reports Pitchfork.

One of the best selling British albums of 2009, the case is likely to result in a substantial pay off for Gang Gang Dance.
Publicado por KOOL ROCK RADIO en Wednesday, February 24, 2010 No comments:

We quite agree Tom... 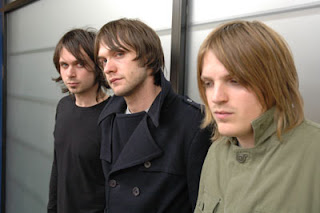 The outspoken frontman claims there are no iconic musicians left because artists reveal too much about themselves on blogging websites such as Twitter.

He said: "It's not like what it used to be like in rock 'n' roll. In the '60s and '70s you had the likes of David Bowie and Marc Bolan, and then in the '80s you even had shit acts that were rock stars. Then in the '90s you had the Britpop revival.

"I think - especially in the last three or four years - the internet's taken a stranglehold and killed off the myth of the rock star now. You know when you used to buy the records and there was the myth behind them? There's too much on blogs now and I think it's killed it off. Nobody's surprised by an interview anymore or anything. It's quite tragic."

He also said blogging has taken away the spirit of rock 'n roll'. He told Bang Showbiz: "There are so many rock stars writing these self pitying blogs and it's not in the spirit of rock 'n' roll, it's like 'Wow, what rubbish'."
Publicado por KOOL ROCK RADIO en Wednesday, February 24, 2010 No comments: