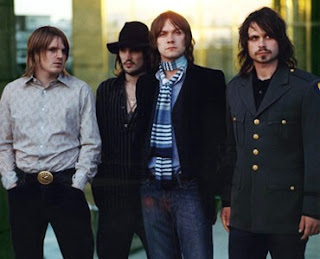 Kasabian have promised fans an "epic" bout of new material on their forthcoming album.
Currently holed up in a studio in San Francisco, Kasabian are planning a number of festival slots this summer. Due to appear at RockNess, the Leicester group will also perform at Spain's Bilbao BBK.

Set to debut new material, it seems that the group's fourth album is almost complete.
Speaking to ThisIsLeicestershire, a rep from Sony / BMG explained that the group were at the mixing stage. Producer Dan The Automator has taken control, with sessions hidden away on the West Coast.
Continuing, guitarist Serge Pizzorno explained that the new album would be another "epic" instalment. "Well, it's epic," he claimed.
"It's big songs that make you feel like anything's possible. It's a really positive record. I suppose it's a combination of all three records but we've just taken it a bit further."

Continuing, the guitarist claimed that Kasabian aimed to improve with each record. "I'm really excited about it, because after the last record, people really liked it and wanted to know what was next, and I'm happy to say that it's got better. I'm excited about playing it live – there are tunes on there that are going to take people to a new place."
Kasabian are set to release their new album in October.
Publicado por KOOL ROCK RADIO en Wednesday, April 27, 2011 No comments:

The View To Release New EP In June 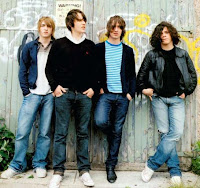 Following the release of third album 'Bread & Circuses' in March, The View has announced details of a new EP called 'Cutting Corners', which is due out on June 13.
Fresh from releasing a cover of 'I Need That Record' the band are plotting an upcoming EP.
The  five track EP will feature the tracks 'Sunday' and 'Happy' as well as three exclusive, brand new tracks 'Sideways,' 'Alone' and a Tim Hutton mix of 'Sunday.'
The tracklisting for 'Cutting Corners' is:
The View have just completed a huge sold out tour of the UK but will play the following shows:
Saturday 30th April – Camden Crawl (Kentish Town Forum)
Friday 13th May – The Great Escape (Concorde 2)
Thursday 19th May – Liverpool Sound City
Friday 8th July – T In The Park
Sunday 10th July – T4 On The Beach
Friday 26th August – Leeds Festival
Sunday 28th August – Reading Festival
The View are due to release 'Cutting Corners' on June 13th.
Publicado por KOOL ROCK RADIO en Wednesday, April 27, 2011 No comments: