Watch: The Saturnettes Share "Bob From The Cure" Music Video

Finland indie-pop band The Saturnettes have unveiled the video for “Bob From The Cure”, the lead single from their forthcoming sophomore album "The Saturnettes II". The song is part of our current playlist www.koolrockradio.com.

Australian trio Midnight Juggernauts have unveiled a new amazing video for "Memorium", the new single taken from their upcoming new album 'Uncanny Valley', out on July 9 through Siberia and Record Makers. The song is part of our current playlist www.koolrockradio.com.

According to press release, the follow-up to 2010's The Crystal Axis, was inspired by a 1970 hypothesis from roboticist Masahiro Mori's, also called Uncanny Valley, which posed: "I have noticed that, in climbing toward the goal of making robots appear human, our affinity for them increases until we come to a valley, which I call the uncanny valley." Likewise, the press sheet promises "robotic sounds made by human hands."

The video is a visual documentary on the evolution of CGI from 1951 to the present. Watch it below. 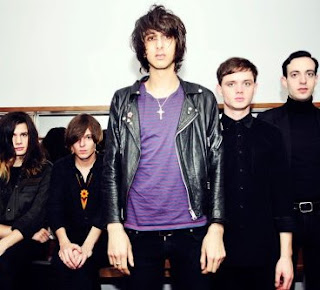 The Horrors have confirmed that they've nearly finished their new album, the follow-up to 2011's 'Skying'.

"I always think there is more in common with out albums than a lot of people say, but we always want to move forward as a band and make something better than what we have done before, and I think we have definitely been successful with that. Faris [Badwan, singer] is sounding fantastic too – I think it's the best he has ever sounded."

About the potential first single from the album, Webb added: "It's a very upbeat song full of electronic oscillations. 'Euphoric' is definitely a good word to describe the way it sounds."

The album is scheduled for release later this year, presumably through XL, the band’s current home.
Publicado por KOOL ROCK RADIO en Wednesday, May 29, 2013 No comments:

Watch: Bleech Release New Video For "Not Like You"

London band Bleech have revealed a new video for "Not Like You", the lead single of their forthcoming sophomore album 'Humble Sky'. The single will be released physically and digitally on 1st July.

Sarah Bick provided the visuals, and this was the concept that she used for this video: "Interpreting your concept of ugly/beautiful, I ran the clean Epic edit through a VHS player, and filmed it back off of an old cathode TV. This gives the video that special broken interlace and grungy colourway which can't be mimicked digitally. And there's the ugly/beautiful contrast of the soft young boy raving with head bangers and sweaty palms.

The motifs of the song like cloak appear, and the 'house in the countryside' appears twice, first seeing himself in it (before the stairs) and lastly leaving it literally going up in smoke at the end. His motion has been synced to the track, with jumps, spins and looks punctuating lyrics.

The suggestion of a school setting, absent of others subtlely brings up feelings of growth, hiding out or taking on, being left behind, or reacting against the natural order and of those in charge. The equation juggling of life, running out and going against the tide. He's on his own, he's not looking to others for how he should be"

London based-trio Mazes have shared the video for "Bodies", the latest single taken from their new album 'Ores & Minerals', released back in February via FatCat Records. The song is part of our current playlist www.koolrockradio.com.

'Bodies' it's been around since last year, but it has been officially released as a digital single this Monday.

The video was directed by AC Williams of Vision Fortune, who explained:

"The idea of the video came from the idea that we as humans are inevitably attracted to both moving image and still imagery such as photography and painting. The video explores and raises questions about the parallels between these two mediums: we see the subjects sitting as still as possible for these 'video' portraits, subtle nuances appear on closer inspection as we the audience see eyes blinking and twitching."

Get your copy of 'Ores & Minerals' now on iTunes.
Publicado por KOOL ROCK RADIO en Wednesday, May 29, 2013 No comments:

Cold Cave has unveiled the video for his new brilliant single "Black Boots", taken from the 7" Black Boots/Meaningful Life, available now via theheartworm.com. The song is part of our current playlist www.koolrockradio.com.

The video was directed by Slava Tsukerman in aesthetic collaboration with designer Alexandre Plokhov. Watch it below.

Pet Shop Boys continue to tease their forthcoming 12th album 'Electric', which will be out on July 15 through their own label x2 through Kobalt Label Services.

This time, they have posted a video clip featuring a snippet of  "Fluorescent", the fourth song on the album, and like their previously unveiled track "Axis", it travels more in the club vein.

Check the video below.