Watch: Big Deal Unveil New Video For "In Your Car"

Big Deal, the London-based duo of Kacey Underwood and Alice Costelloe, have unveiled the video for "In Your Car", taken from their forthcoming sophomore album 'June Gloom', out on June the 4th via Mute Records. The song is part of our current playlist www.koolrockradio.com.

The track was born when Costelloe hummed the melody while the band cruised down the California coastline and sure enough, its carefree sunshine pop perfectly evokes endless summer. “That fun, road trip kind of a song doesn't happen a lot with English rock bands because it’s just not in the culture,” explains Underwood.

The video was directed by Danny Perez. Watch it below.

Belgium indie space pop band Recorders have released the video for their excellent debut single "Purple And Gold", taken from the band upcoming debut album 'Above The Tide', mixed with Tony Hoffer (M83, Beck, Air, Phoenix, The Fratellis, etc.). The song is part of our current playlist.

The video took over a year to make and features nearly 4 minutes of dogs acting like people. Watch it below.

Passion Pit have shared the video for "Cry Like A Ghost", taken from their 2012 album 'Gossamer'.

The video was directed by Daniel Kwan and Daniel Scheinert. Watch it below.

Big Country To Release New Album 'The Journey' Next Month 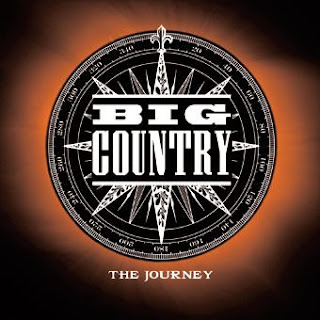 Scottish band Big Country have announce the release of their brand new studio album titled ‘The Journey‘ as well as a 14-date tour of the UK this April.

'The Journey' is Big Country's ninth studio album and their first since the sad and untimely death of lead singer and songwriter, Stuart Adamson in December 2001. It will be relased in April 9 via Cherry Red Records.

Recorded on the Welsh border town of Wrexham in an old cold war nuclear bunker, with 8-feet thick walls and no phone or internet signal, group members found themselves isolated and disconnected from the outside world, allowing for an interesting and productive time in the studio.

The 12-track album is released some two years after Big Country embarked on a new era, when guitarist and founder member Bruce Watson officially invited Mike Peters (The Alarm) to join them as lead vocalist for two concerts to celebrate 30 years since the group’s formation.

“It’s an album about hope and redemption,” says Bruce Watson. And from the opening chords of anthemic opener In A Broken Promise Land – a nod, stylistically at least, to Big Country’s early days when the songs he and Stuart Adamson conjured up felt like the equivalent of a Molotov cocktail being lobbed into the midst of ‘80s pop – it’s impossible to ignore the spirit of optimism that burns brightly throughout all 12 tracks of The Journey.

“There are themes of redemption and of coming to terms with a life lived all through this record, and the process has brought us together as a family united and ready to stand proud for what and who we are…..Big Country.” explains Mike Peters.

Mark Brzezick adds: “I am looking forward to the next Big Country chapter…. it feels right and fitting that Big Country continue the journey… and as Stuart always said, “When taking a journey, it’s not about the getting there, it’s enjoying the view on the way”.

Post War Years have shared a new video clip for their track "Boing", taken from the band's 2012 EP 'The Bell'.

The song was also included on their new full-length "Galapagos" released last month through Chess Club Records and is part of our current playlist www.koolrockradio.com.

The video was filmed and directed by Post War Years. Watch it below.