The Jesus And Mary Chain 'Upside Down' 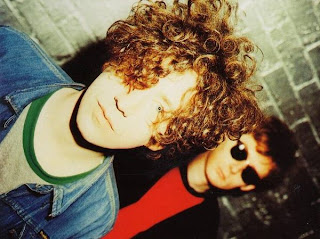 The Jesus And Mary Chain are set to release their new collection 'Upside Down' on November 15th.

Mixing feedback with sweet pop melodies, The Jesus And Mary Chain introduced a new, feral brand of rock 'n' roll. Dressed in black, their hair fluttering over their eyes the band were at once iconic and threatening.

Centred on the Reid brothers, The Jesus And Mary Chain helped pioneer the shoegaze sound with their debut album 'Psychocandy' before beginning to experiment.

Splitting 1998, the band are now set to be celebrated on a 2-CD best of. 'Upside Down' collects key tracks from over two decades, including their seismic singles and a number of rare B-sides and live cuts.
The new compilation coincides with the documentary 'Upside Down: The Story Of Creation Records' which includes plenty of the band's material. The new album is named after the group's debut single, and charts their highs and lows.

The Best of The Jesus And Mary Chain is a 2 CD career-spanning overview that marks 25 years since their first album Psychocandy. The very first of its kind for brothers Jim and William Reid and their many notable musical cohorts, Upside Down features all single ‘A’ sides, key album tracks and rarities, with guest appearances by Shane MacGowan (The Pogues) and Hope Sandoval (Mazzy Star), and, of course, original drummer Bobby Gillespie (Primal Scream).

Early B-side 'Vegetable Man' is also made available while rare tributes such as 'Moe Tucker' are also on show. The band are now more relevant than ever, with groups such as Vivian Girls and Black Rebel Motorcycle Club openly admitting their debt to the Scottish feedback fetishists.

'Upside Down: The Best Of The Jesus And Mary Chain' is out on November 15th.
Publicado por KOOL ROCK RADIO en Tuesday, October 05, 2010 No comments: