Savages To Release Debut Album 'Silence Yourself' In May

London post-punk quartet Savages have unveiled details of their debut album 'Silence Yourself', which will be released on May 7 via Matador and frontwoman Jehnny Beth's Pop Noire label.

The album was produced by Johnny Hostile and Rodaidh McDonald (the xx, Adele, How to Dress Well), and features re-recordings of tracks from the band's 2012 EP, I Am Here, including their killer debut single "Husbands", which peaked at #7 in our Best Tracks of 2012 chart.

The band have also shared the audio for "She Will" a new song taken from the album, and it's already part of our current playlist. Listen below.


Check the artwork and tracklist for Silence Yourself  below. 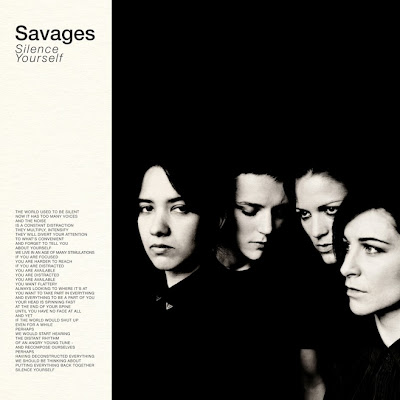 As previously announced, Cold Cave return with a new 7" EP 'Oceans With No End'. Now, Wesley Eisold has just unveiled the audio for "People Are Poison", the B-side of the EP.

The song is now part of our current playlist www.koolrockradio.com. Listen below.

The new EP can be now pre-order on colored vinyl and as a digital download through Deathwish. According to Wesley Eisold, the release will also be available digitally through Amazon and iTunes shortly.
Publicado por KOOL ROCK RADIO en Tuesday, March 19, 2013 No comments:

French electro-pop duo Juveniles, have unveiled the video for their new single "Strangers", released yesterday (March 18). The song is part of our current playlist www.koolrockradio.com.

Produced by Yuksek, Strangers is their first since last November's Through The Night re-release (originally released in June 2012) , and is taken from their forthcoming debut album. The single, with remixes from Jupiter and Le Crayon is available on iTunes.

The video was directed by Luci Shroder. Watch it below.