Single of The Week November 11/2013: Wallflower "Only In My Dreams" 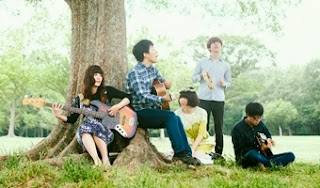 This week's SOTW on Kool Rock Radio is "Only In My Dreams", the new track by Japanese indie pop five-piece Wallflower.

Comprised by Masami (vocal/guitar), Ryuta (guitar), Haru (Vocal/Bass), Naohiro (drums) and Rina (vocal/synth), they uploaded their music on Soundcloud in January 2012, which caught the attention of The Pains of Being Pure At Heart, and they invited Wallflower to perform on their Japan tour, which dramatically increased their exposure.

The refreshingly shiny, popping sound rooted in 80s and 90s guitar pop resonates with the new-generation indie band. They released its debut EP 'Filled With Flowers' on Japan's label Fastcut Records, followed by the release of a 7" vinyl "Dreamy Days" in January 2013.

They're currently working on their debut album and "Only in my Dreams" is their catchy/dreamy new single.