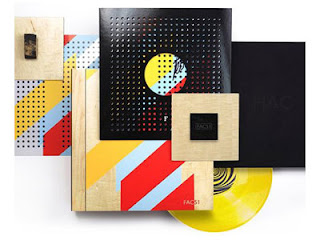 As we all remember, celebrated co-founder of New Order and Joy Division, Peter Hook released his critically acclaimed memoirs in 2009 titled The Haçienda: How Not To Run A Club. The memoirs detailed his sordid life as a rock star and the demise of his finances.

Now these memoirs turns into boxset, with only a few hundred copies of it being made available. Inside it you'll find signed sections of the book accompanied by unpublished material. It also houses a 10" record with one of Peter Hook's new tunes, 'The Viking'.
The design for the boxset has been the job of English designers Foruli who with the help of Hook completed it with a special art print.

It was easy to guess it would be highly prized and limited so here are the details:
There are only 400 available of the standard edition which retail at £300.
100 copies of the deluxe at £600 which can you believe contains an actual piece of the Hacienda bar top.

Finally there are two ultimate editions available, which include one of only six handmade custom FAC51 Hacienda bass guitars.

At the height of Hook's fame during the Hacienda days, the band were throwing all their royalties into the running of the club with only £20 left for each of the band at the end of the week. You can buy these beautiful boxsets right here.
Publicado por KOOL ROCK RADIO en Tuesday, September 07, 2010 No comments: