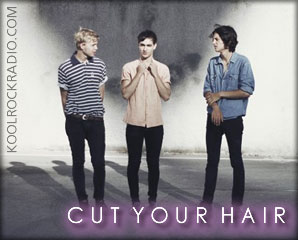 Cut You Hair is a post-punk, dream-pop band formed in 2010 in Barcelona, Spain. The band consist of Sergio, Aleix and Ed. The three of them went to the same school and decided to form a band because they believed that their souls were connected, just like their vision about music.

About their music, lead singer Sergio had this to say: "There must be a soul in everything we do, if we don't feel a song, we just won't play it. I woulndn't have any sense to us. I reckon it is too early to label our music yet... So I'm just going to call it all pop by now".

The band released their debut single "Utah In Pictures" through the spanish label Mushroom Pillow Records on 30 April 2012. The single includes two B-sides: "I Wish I Was Stoned" and "I Just Need Another Friend."

"I was tired of the place I was living in, so I just went on the internet to check out some cites from wherever… like planning what would be in the future for me. And I bumped into this page with pictures of Salt Lake City. It looked sort of decadent in a way, it inspired me, I knew I had to write the song." Sergio said.

The band is currently planning their second single.