The Flaming Lips have unveiled a sci-fi-type video for the track "You Lust", taken from their new album 'The Terror', out now via Warner Brothers.

The video features a four-minute edit of the album's thirteen-minute version and features some extra-visceral type of nudity.

Talking about the video, Flaming Lips' Steven Drozd said: "I had nothing to do with it. Not one thing. Wayne sent me an early edit and asked my thoughts. That was about it. If Wayne has something he wants to try with the rest of the band members, then we’ll be thrown in. But if we’re not needed, then he doesn't involve us. That’s fine with me."

"The nudity in the video isn't glamorous or sexy. It’s very stark and disturbing. I think that’s a bold move. There are some shots when you go, 'That’s an interesting angle to shoot a flaccid penis from...' But Wayne isn't shy about being naked."

You can buy The Flaming Lips new album 'The Terror' on iTunes.
Publicado por KOOL ROCK RADIO en Thursday, May 02, 2013 No comments:

Primal Scream are streaming "Invisible City", another new track from their upcoming tenth studio album 'More Light', out on May 13.

Coastal Cities have unveiled a new video performing “Nothing Ever Changes” in the new Burberry Spark Sunglasses campaign.

The song is the double A side to "Entropic", out on June 3. Watch the video below. 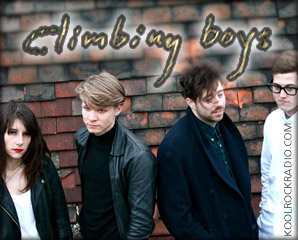 Climbing Boys are a four-piece band based in East London.

Comprised by Tom Salo, Gavin Bowers, Emma Quick and Alex Kociuba, the band formed in late 2012, played their first show at Barfly in November last year and they have just released their debut EP 'Take the Floor'.

Musically, the band could be describe as post-punk/new wave. Clearly, the early 80s have been reborn in this London group.

They combine a profound sort of songwriting with a sound reminiscent of early Echo & the Bunnymen (Crocodiles), Joy Division, and David Bowie. Their songs will fit right into those old-school playlists we all like to make.

The band have are planning some live shows for June so keep a close check for dates and venues in the near future.

You can purchase your copy of Climbing Boys debut EP 'Take The Floor' now on iTunes.

Stream "The Firing Squad" below: