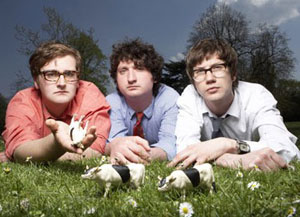 Young Knives have announced details about their new album 'Ornaments From The Silver Arcade’.
The band's debut ‘Voices Of Animals And Men’ was nominated for a Mercury Prize. Their third album - and follow up to second effort ‘Superabundance’ - is described as a "move beyond" the familiar.
This new material was recorded in LA at the Seedy Underbelly Studios with Nick Launay (Yeah Yeah Yeahs, Arcade Fire, Nick Cave and the Bad Seeds).
Fans are being told to expect a mixture of the trios "understanding of a spiky pop hook" but build on top of that familiar post punk template the groove of acid house and the smoothness of soul across its tracks.
‘Ornaments From The Silver Arcade’ is released on 4th April. Young Knives will tour the UK around the release date, more details to be announced soon. 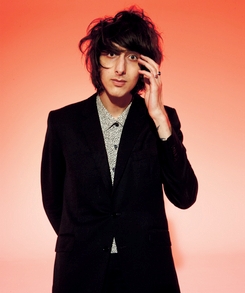 The frontman of indie/shoegaze band The Horrors has debuted a new project called Cat's Eyes, which Pitchfork describes as:


"[Badwan's] duo with the Canadian opera soprano and multi-instrumentalist Rachel Zeffira. The group specializes in a glassy, symphonic take on girl-group pop, and they played their first show in December in a pretty unusual place: St. Peter's Basilica at the Vatican, during an afternoon mass "attended by seven high-ranking cardinals".
The group played their first ever gig at  St. Peter's Basilica at the Vatican in December – and the video has just been made available http://www.catseyesmusic.com/.
Faris Badwan likes to keep busy. Currently working with The Horrors on their third album, the singer has also indulged his artistic streak with a series of exhibitions, including a recent solo show in Milan. 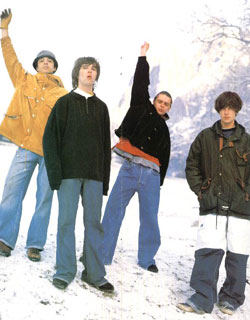 The Manchester band's 1990 gig has inspired a new film.
Arranging a one off show at Spike Island, The Stone Roses gig became a landmark moment in British youth culture. Watched by 30,000 people and came at a time the band were at the peak of their fame, the gig gave writer Tom Green the idea to make the film. The writer is responsible for Channel Four’s Misfits, although this time he had passed writing credits to '24 Hour Party People' actor Chris Cohill.
Speaking to BBC News, Tom Green explained some of the motivations behind the new film project. "This is a raw and truly authentic rites-of-passage story. It's full of the humour, heartache, dreams and fears of being part of a brotherhood of mates, and set to the greatest record ever written".
He added: "The Roses died in '95. This is the resurrection."
Famously, the actual show was something of an anti-climax featuring dodgy sound and overpriced burgers. However the event raised expectations, and demonstrated that despite years of Thatcher oppression youth culture was still a vital force in British society.
Many of the musicians involved in the show are expected to make a cameo in the film, which is due to start shooting later this year. The permanently young Mani could well play himself, following a similar walk on part in '24 Hour Party People'.