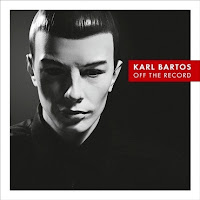 Former Kraftwerk member Karl Bartos has announced that he will release his second solo album "Off the record" on March 18th via Bureau B.

The follow up to his 2003 album 'Communication', features 12 tracks that were taken from song ideas he wrote during Kraftwerk's heyday (he kept a secret acoustic diary and jotted down ideas while on the road).

Here's a first taste from Off The Record, the first track "Atomium":

Check the tracklisting for "Off The Record" below.