DEVO are to star in an episode of 'Futurama' 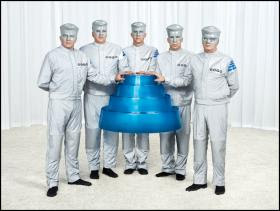 DEVO are set to guest star in 'Futurama'. The show's creator Matt Groening is a huge fan of the band, and has asked them to appear in the 100th episode of the award winning animated show.

Returning with a new album this summer, DEVO are ending twenty years of silence. To coincide with this, the band have taken part in a number of bizarre events.

The episode will see DEVO campaign for mutant rights. Leela's parents are second-class, mutant citizens who live underground in the sewers, the members of Devo have mutated over the years, while vocalist Mark Mothersbaugh helps out with their campaign for equality.

Sounds intriguing! The show is set air later this year. Meanwhile, preparations continue for the band's new album. 'Something For Everybody' contains guest appearances from Santigold and more, with comeback single 'Fresh' out now.

DEVO are due to release new album 'Something Everybody' on June 14th
Publicado por KOOL ROCK RADIO en Monday, June 07, 2010 No comments: