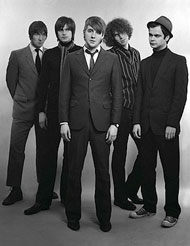 Kaiser Chiefs' Frontman Ricky Wilson gave a rather depressing depiction, stating that he is "not sure" if indie will survive. "Necessity is the mother of invention and there will always be music. Whether it will be a viable career for five guys with guitars I'm not sure at the moment but you know, they'll be there in a garage somewhere."

Simon did, however, point out that the music business is changing all the time, and he can't predict where things will turn next.

He said: "When he started [2008 album] 'Off With Their Heads' things like twitter didn't exist, things have moved on, when we did that, singles were sort of dying, then, now, singles are massive again and albums are on their way out.

"We just want people to hear the music, so it's about making it accessible to everyone. Change is good." They recently talked about the lack of attention given to the physical version of 'The Future Is Medieval'.

"The publicity around the 'choose your own version' overshadowed the CD so much that still no-one knows it's out" said Simon Rix.