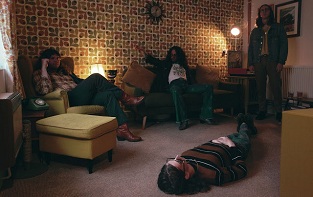 The northern and eastern boundaries are formed by Alexandra Dock, while the western edge is subsumed into the smog of the Pyewipe industrial area. The south is bordered by impassable railway tracks. It is an area with little hope, no tourists, and the dried-up husk of a once prosperous fishing industry. Zak, Veggie, Lenny and Bambi all attended the same school, though the semantics of the word ‘attended’ is loosely applied here. They formed a close bond while locking horns over their different music tastes. Guitarist Lenny drew inspiration from the avant-garde sounds of Nick Cave, The Birthday Party, and The Pop Group, while the other three members leaned towards indie classics and the harder edges of rock. They went on to study at Grimsby Institute and the idea to form a band was soon realized and became serious in 2018.

"We were talking a lot at the start of the lockdown about what we were missing like festivals, the big hometown gig we had arranged, service stations and new fans and realised that actually there were loads of people missing out on huge life experiences”, says singer Zak. “The ones that come once in a life like Reading festival after exam results, late night parties in the Grimsby East Marsh Estate and fires on the Cleethorpes beaches in Spring and driving in your first car out of town to parties with your cheap runner full of tanked up singing mates.”

"We grew up with social media all around us and were recounting stories in Jimmy Mac’s tour bus, laughing about our school days with Facebook parties, pictures you weren’t meant to see and finding amazing music. A few days later I was reading about yet another teenager greatly troubled with mental health issues and the role the internet played. I had also been keeping up to date about the #MeToo movement and yet another profiled predatory pervert taking advantage of aspiration."

The song is out now, stream it below.

Watch: Clan Of Xymox Drop New Single/Video "All I Ever Know" 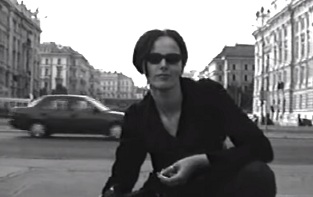 Dutch darwave legends Clan Of Xymox have dropped the video for their new single "All I Ever Know".

The song is taken from the forthcoming album 'Spider On The Wall', set to be released on July 24th through Metropolis Records in North America and Trisol in Europe. Pre-order it here.

Email ThisBlogThis!Share to TwitterShare to FacebookShare to Pinterest
Etiquetas: All I Ever Know, Clan Of Xymox, Darkwave, Goth Wave, new video, Spider On The Wall 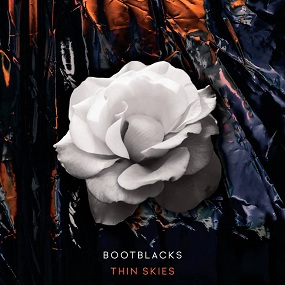 The album, produced by Jason Corbett from ACTORS will be out on September 20 via Artoffact Records. The nine songs combine a driving, dancefloor pulse with soulful, melodic post-punk, yielding results that are positively anthemic. Pre-order your copy here.

Thin Skies evokes scenes of dark days and reckless nights in the urban jungle – a marriage of post-punk emotion and clubland sweat. Frontman Panther Almqvist's brooding voice captivates as it veers from detached cool to deep vulnerability. Guitarist Alli Gorman's hard jangle "channels the trademark delay techniques of [U2's] The Edge," in the words of Post-Punk. Keyboardist Barrett Hiatt's arpeggiated synths are the life force pushing the songs relentlessly forward, as Larry Gorman bashes a mix of acoustic and electronic drums with power and perfection. Backing vocals come courtesy of Shannon Hemmett (ACTORS) and Kennedy Ashlyn (SRSQ, Them Are Us Too).

Bootblacks' hometown of New York City is integral to Thin Skies' sound. The band's name itself is said to be derived from novelist William Burroughs’ description of the dark underbelly of glitzy NYC. Almqvist states: "It's an energetic city and people have all the reasons in the world not to give you the time of day. I think our music has been shaped by that in many ways."

Check out the album's tracklist and listen to new single "Traveling Light" below.