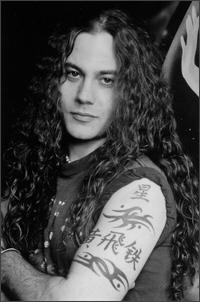 Former Alice in Chains bassist Mike Starr, aged 44, was found dead in Salt Lake City on Tuesday(March 8), police said.
Alice In Chains were often tagged as a grunge group, but in reality the band had little in common with the scene bar geography. Formed in Seattle, the group shared a love of fuzzed up riffs but were in reality an unreconstructed metal group.
Bass player Mike Starr departed the band shortly after the release of 'Dirt' and became a cult figure to fans. Drifting out of the music industry, Starr became one of the great lost talents of the grunge era. Re-emerging some time after, Mike Starr took part in a controversial reality TV show. Broadcast on VH1, the bass player revealed much about his decade long struggle to free himself from drug addiction.
Arrested three weeks ago on an outstanding warrant, it was immediately apparent that drugs were still a problem in Mike Starr's life. Now living in Salt Lake City, the bass player was found dead in his apartment.
Just 44 years old, the news broke on TMZ. Police have confirmed the death, with Mike Starr's father commenting only to say: "It's a terrible shock and tragedy."
The death is thought to be a drug overdose. "There is nothing to indicate that this was foul play by another individual," police said.
In a sad twist, Alice in Chains frontman Layne Staley died from mixture of heroin and cocaine in 2002. The remaining members of Alice In Chains have yet to comment on the news.