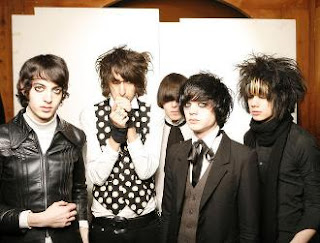 The Horrors have spoken about their efforts to build a follow up to 'Primary Colours'. Lambasted in some quarters as being style over content, The Horrors hit back in the best way possible.
Second album 'Primary Colours' was a stunning return, fusing their garage rock template to clicking Motorik rhythms. Blowing apart their black and white image, 'Primary Colours' was a technicolour release which benefited from Portishead musician Geoff Barrow on production duties.
Currently working on their third album, The Horrors have spoken about the recording process. Holed up in their London studio, the black-clad group are putting the finishing touches on their new batch of material.
The Horrors have explained that Geoff Barrow insisted they produce themselves on their third album. "When we were working with Geoff it was kind of his suggestion (to work on their own)" said Rhys Webb. "He was into the way in which we attacked them [the songs]. And towards the end of the process, he said, 'Why don't you guys just go for it yourselves next time?'"
The band confirmed that ten songs had been completed so far. Working in Dalston, they have so far refused to confirm any potential release date. Meanwhile, singer Faris Badwan is set to launch a new club night in London. Held in The Book Club, the night will mix carefully chosen music with visuals including the singer's own art.
The Horrors are due to release new material later this year.
Publicado por KOOL ROCK RADIO en Thursday, January 13, 2011 No comments: 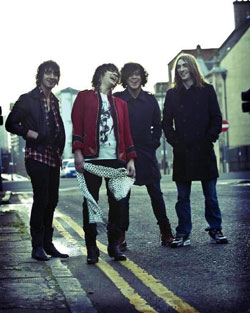 Since then the band have enjoyed experimenting, releasing a follow up which contained sea shanties, orchestras and elements of hip hop. Now it seems as though the Scottish indie rockers have gone back to basics.
Completing their third album with producer Youth, The View have opted for the name 'Bread And Circuses'. Due for release later this year, the album was initially titled 'The Best Lasts Forever'. Keeping the new material under wraps, the hard touring band decided to get back out on the road last year. Finishing 2010 in style, The View hit intimate venues across the country as the snow fell.
Announcing another bout of tour dates, The View have now confirmed their latest single. 'Grace' is due to be released on March 7th, complete with previously unreleased flipside 'Clowns'.
The following week the band will release 'Bread And Circuses'. Confirming details of the finished tracklisting, the new tracks include a number of straight forward one word titles: 'Life', 'Friend', 'Blondie' and more. Ending with 'The Best Lasts Forever' the album is storming return from the band, with The View clearly revitalised after locking themselves away in the rehearsal studio.
The View are due to release 'Bread And Circuses' on March 14th.
Tracklisting:
Grace
Underneath The Lights
Tragic Magic
Girl
Life
Friend
Beautiful
Blondie
Sunday
Walls
Happy
The Best Lasts Forever
Publicado por KOOL ROCK RADIO en Thursday, January 13, 2011 No comments:

Pulp Ready For Live Return In 2011 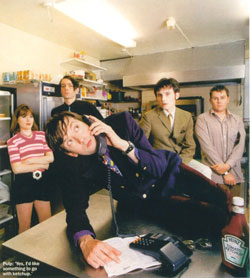 Britpop icons Pulp are set to make their live return with a series of performances. The original line up of Pulp are due to return this year, after confirming a series of tour dates. Nick Banks, Jarvis Cocker, Candida Doyle, Steve MacKey, Russell Senior and Mark Webber will join forces for a series of shows.

Of all the unusual success stories thrown up by the Britpop era, Pulp's was undoubtedly the most emotional. The Sheffield group have been making music for over a decade - largely to indifference - before gaining their shot at fame.

Producing arguably the finest single of the era in 'Common People' the band achieved nationwide fame before splitting in 2002. Since then, Jarvis Cocker has worked on a number of solo projects, under his own name and others.

The frontman had long since disputed a Pulp re-union, despite all original members remaining on good terms. Now it seems that the Sheffield band are to go down the same route as one time rivals Blur and Suede.

Drawing on their entire back catalogue, the first shows to be confirmed include a headline slot at London's Wireless festival in Hyde Park. Taking place on July 3rd, Pulp's slot will follow a performance at the Primavera Sound Festival in Barcelona on May 27th.

The first time that all original members of Pulp will have shared a stage together since 1996, the shows are no doubt the first of many to be announced for next summer.