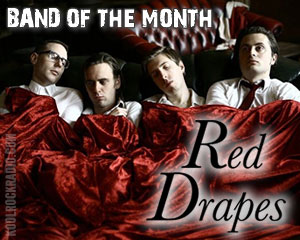 Red Drapes are a four-piece from London, UK. Their melancholic sound and strong lyrical emphasis takes influence from post punk and new wave bands of the 80’s, The Smiths, Joy Division, Echo & The Bunnymen and The Cure.
Immersing themselves in the metropolis ideal of London, Red Drapes began to create melodious portraits of lovelorn places and their inhabitants. People, the self, and the romanticised notion of cities failing are all subject matters and lyrical stimulus.
Themes of isolation, banality, unhappiness can be felt and a dystopian and somewhat nihilistic view of modern life is documented and encapsulated in their songs.
Their debut was a five-track EP called 'Ep.1', produced by Laurie Latham (Echo & The Bunnymen). This immediately caught the attention of German label Humming Records who released the European version in February 2011.
The band have finally released their debut album called 'Suffer In Silence' (Artwork by Jing Lu) and you can buy it in their UK merch store: http://reddrapes.bigcartel.com/.
**Plus: 'False Alarm' reached the Top 100 in the category BEST TRACKS OF 2010 of Kool Rock Radio's Annual Report.