Watch: Washed Out Reveal Video For 'A Dedication'

Washed Out has unveiled a new music video for 'A Dedication' taken from their 2011 debut album 'Within And Without'. The song is part of our current playlist www.koolrockradio.com.

Email ThisBlogThis!Share to TwitterShare to FacebookShare to Pinterest
Etiquetas: A Dedication, Dream-pop, indie, Kool Rock Radio, KoolRockRadio, Music News, Music video, Washed out, Within And Without

Passion Pit have unveiled the video for their new single "Constant Conversations" taken from their recently released album 'Gossamer'. 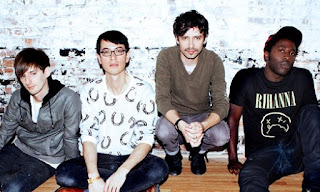 Kele Okereke has denied rumours that the Bloc Party new album 'Four' will be their last.

Rumours started yesterday after Kele appeared to be unclear over the future of Bloc Party during an interview with Australian radio station Triple J.

After seeing how his words had been interpreted, Kele wrote a post on his blog stating that the future of the band depends on 'inspiration'.

"I did an interview for triple JJJ in australia where I talked rather absentmindedly about the future of bloc party. I want to make it clear that I want another BP record as much as anyone, it really just depends on us being inspired together as a band."

"The reason we made FOUR was because it came so easily that it just made sense. we only finished this record a few months ago so right now we are all pretty much exhausted, we havent felt the need to start writing any new music. I know this will change once we go on tour, because this is how we have always felt after every record. you get inspired by what you see and hear on the road, its part of the process, so dont stress internet, I am sure that once we start touring we will start writing again and once we start writing there will be a record in some form I guarantee."
Publicado por KOOL ROCK RADIO en Wednesday, August 01, 2012 No comments: