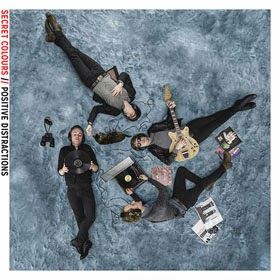 Our new Album of the Week is 'Positive Distractions', the new excellent record of Chicago-based space rock/pop band Secret Colours, out tomorrow (April 29).

Self-proclaimed "bastard seed of ‘60s psychedelia and ‘90s Britpop bloodlines," the 4-piece band from Chicago, IL, have their influences rooted closer to the UK, they grew up listening to early 90's British music: Blur, The Stone Roses, Happy Mondays, Oasis.

The follow up to 2013's album 'Peach', sees the band growing up musically, taking a more mature route, and just like they describe their sounds, has lots of 60s psychedelic vibes tinged with Britpop sounds, such a kool combination.

In an interview, talking about the new record, frontman Tommy Evans explains: "We recorded 12 songs in 11 days for 'Positive Distractions.' We worked fast. We didn't think about much. There wasn't too much experimenting. We just knew what we wanted to sound like. It was a strange experience for all of us because we were all so into it. We felt in the right place at the right time. It was the first Secret Colours record where it felt like a band. Previously, a lot of the guitar and song structure is was mostly me. On 'Positive Distractions' we all were working together and it's more rewarding I feel."

Get your copy of the album here, and visit the band on their website: secretcolours.com
(facebook.com/secretcolours)
Tags: Secret Colours
Publicado por KOOL ROCK RADIO en Sunday, April 27, 2014 No comments: