Alex Turner: Arctic Monkeys Is a 'Bad' Name For a Band 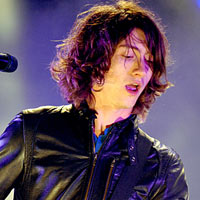 Arctic Monkeys frontman has admitted his band’s name isn’t the best, and has laid the blame squarely at the door of his bandmate Jamie Cook.

“I’ve no idea where it came from” he told. “It was Jamie’s fault, he came up with it and he’s never even told us why. If he even knows, he’s keeping it a secret from me. This is the first band I’ve been in. A lot of people in bands have a few goes at it before they find the one that works but with us, we all started playing guitar and everything at the same time.”

“There might have been other ideas for offshoots at the time, but the Monkeys was the first one. It sound like a first band name, doesn’t it? It’s so bad that the tribute bands don’t sound worse. I saw there’s an Aertex Monkeys, that’s pretty clever.”
Publicado por KOOL ROCK RADIO en Tuesday, September 27, 2011 No comments: