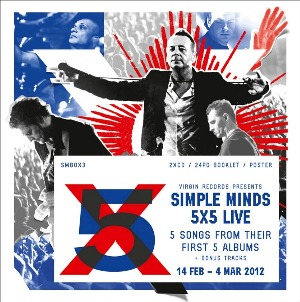 Following the universal acclaim earlier this year for Simple Minds' landmark 5 X 5 shows and the accompanying X5 box set, EMI will release a double live album of the tour on November 19th .

The double-CD live album, features five songs from each of the band's first five albums plus bonus tracks. The tour, which took place between 14th February and 4th March, saw the band playing sets that included songs from the albums: Life In A Day, Real To Real Cacophony, Empires and Dance, Sons and Fascination/Sister Feelings Call and New Gold Dream (81, 82, 83, 84), all of which were released in a prolific period from 1979 to 1982.

The 5X5 Live set, will be packaged in a clamshell box with a 24-page booklet and a 25" x 25" tour poster. A presale will be available on simpleminds.com soon.