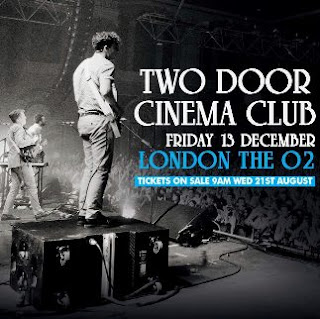 A week ago, Two Door Cinema Club announced they will release a new EP, now they have revealed more details and as a follow-up announcement the band have also revealed a 02 Arena show.

Titled  'Changing Of The Seasons' will feature three brand new tracks and will be released on September 30 via Parlophone. The EP's title-track has been produced by cult electronic artist Madeon.

The band have also announced plans for a headline show at The O2 later this year, they will play the 20,000 capacity venue in London on December 13 in support of their upcoming EP.

I want to know how many gigs we have done to get here," guitarist Sam Halliday said of their O2 date. "We have been quite lucky to build our following in the right way - the pub shows, then the theatre shows, then the warehouse shows.

"It feels like a huge achievement. It is the thing we have been working very hard towards for a long time, but at the same time we feel confident and ready that we are experienced enough and have got enough fans and enough songs and enough records behind us to headline The O2. It will be the biggest moment of our career so far!"
Publicado por KOOL ROCK RADIO en Thursday, August 15, 2013 No comments: