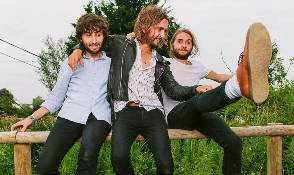 British indie rock three-piece The Family Rain, made up of brothers Will, Ollie and Tim Walter, have released a new video version for "Trust Me...I'm A Genius."

The brothers first started playing gigs in their hometown of Bath which led to word spreading and eventually one Lily Allen took note and signed them to her publishing label.

Their debut album 'Under The Volcano' will be released on February 3rd through Vertigo/Virgin EMI Records. Pre-order your copy here.

Directed by Joe Elliott, the clip is a bombastic view of suburban life shot in their local area. Take a look below.