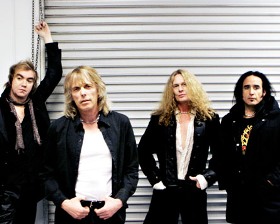 Thin Lizzy are set to release their first brand new album in 29 years. The band will go into the studio next month, recording their first LP without former frontman Phil Lynott, who died in 1986.

This new material will be the band's 12th studio album following their 1983's 'Thunder and Lightning'. The band, who have been touring for the past two years, told Hot Press that they might be playing some of their new material at their Dublin Olympia show on December 13.

Gorham said: "I'll be going out to Los Angeles at the end of the month to work on some songs with Damon and then I think we will start recording in October in our producer Kevin Shirley's studio."

Shirley has worked with Iron Maiden and Led Zeppelin. Gorham added: "We are all excited about the new record but especially Ricky and Damon, they just can’t wait to start recording! You have got six guys there that are chomping at the bit that can’t wait to get this thing going."

Thin Lizzy formed in Ireland in 1969 and their classic hits include 'The Boys are Back in Town' and 'Jailbreak.'

The Sex Pistols have posted a brand new clip for their classic single 'Holidays In The Sun', 35 years on from its original release.

The single was first released in October 1977, and is lyrically built around John Lydon‘s experiences in Berlin when the Pistols decamped there earlier that year as the media frenzy around the group escalated in the wake of their sacking by A&M Records.

John Lydon recently looked back on that trip to Berlin. "Berlin was a very different town then. It was like that scene in Apocalypse Now when they go up the river and they see the flares and the party going on, all the soldiers on acid… That's what Berlin was like, with a chaotic war-zone wrapped around it. The Communists were looking in on this adventure playground. Quite mental."

Watch 'Holidays In The Sun' below.