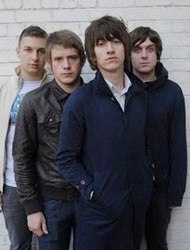 Following the unexpected release of current single 'R U Mine' last month, Arctic Monkeys have unveiled details for a new track.

The new tune, called 'Electricity', will appear as the b-side to 'R U Mine' and both will be available on limited edition purple vinyl, exclusively as part of this year's Record Store Day on 21 April, 2012.

The band are currently in the middle of a lengthy stint across the USA and Canada and recently, the band's frontman Alex Turner has said that he wants to start writing the band's new album.
He said of this: "I don't try to write on the road. I might try to this time, just for a change. Usually, I get home and I realise it's bad, so I've not done it in the past. We've messed around in soundchecks, but I'm not gonna meet a deadline, and it's not like I need to write, though I want a head start for the next time around."
Publicado por KOOL ROCK RADIO en Tuesday, March 13, 2012 No comments: 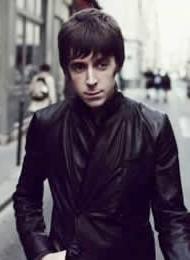 The four-track EP was co-produced by Skream and includes a cover of Tom Jones classic ‘Looking Out My Window' as well as new track 'Night Runner'.
'Fisrt Of My Kind' will be available on limited edition vinyl on Record Store Day, Saturday April 21. A digital version of the EP will be made available from the day after.