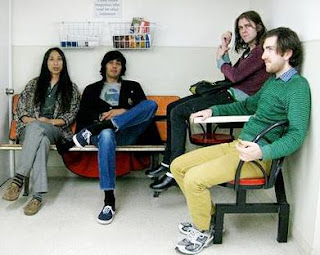 We open a new month and we also have a new band to talk about the whole month.
This time the turn is for ARIEL PINK'S HAUNTED GRAFFITI with their new album 'Before Today' which is highly recomended for Kool Rock Radio.
Before Today offer us 11 catchy tracks that will lead you back in the 60's, kind of psychedelic and wave sounds, the album is a great collection of pure pop songs released this year.
The first single "Round and Round" is one of the finer tracks of the album, a slow-burning pop ditty that sounds like it could've been recorded in1972. In fact, “Round and Round,” “Beverly Kills,” “Can’t Hear My Eyes”, the instrumental “Reminisces” and ass-kicking closer “Revolution’s a Lie” have all appeared in alternate incarnations on past releases, keeping the personal mix-tape modus operandi Pink has followed all along.
Before Today could easily be the best Ariel Pink's album of  to date and might just find him a whole new legion of listeners with the flavours in their pop, still feels like it's just the tip of the iceberg for this staggeringly talented songwriter. He seems to have created a truly classic LP.
We assure you it will be part of your music collection.
Publicado por KOOL ROCK RADIO en Monday, July 05, 2010 No comments: