Canadian band Cayucas have unveiled the video for their new single "High School Lover" out on 11th March. The song is part of our current playlist www.koolrockradio.com.

The song is taken form the band's forthcoming debut album 'Bigfoot' scheduled for released on April 30 via Secretly Canadian.

The video was directed by Cameron Dutra, Watch it below.

San Francisco psych rockers, Moon Duo have unveiled the video for "Ich Werde Sehen", a German reworking of their track "I Can See". It is a classic tune on www.koolrockradio.com.

The song is taken from the band's recent album 'Circles' came out last year through Souterrain Transmissions.

The video was directed by Jovan Arsenic. Watch it below.

Vampire Weekend To Release New Album In May 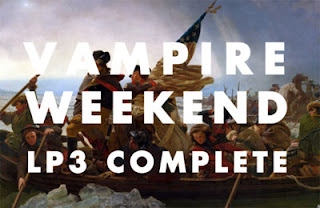 Vampire Weekend have announced via their website, that they will release their third studio album May 6th through XL Recordings.

Produced by Ariel Rechtshaid (Major Lazer, Charli XCX) and the band’s own Rostam Batmanglij, the as-yet-titled was recorded in both New York City and Los Angeles.

In a recent interview, frontman Ezra Koenig called their latest effort 'dark', 'organic', and that it "really does feel like the third chapter in a book."

"We created some characters on the first record, some of which are real people, some of which are ourselves, so it’s not so hard to keep following them and see what their concerns are now and how their lives have changed." He added.