Single of the Week January 17/2014: The Hidden Cameras "Year of the Spawn" 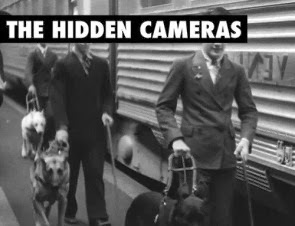 Our new Single of the week is "Year of the Spawn" by Canadian pop collective The Hidden Cameras.

The song is  a dark, psychedelic, pop piece with sweeping atmospheric elements and is taken from the band's upcoming sixth studio album 'Age', which will be out on January 21 through Evil Evil/Outside Music.

With 'Year of the Spawn', there are trumpets, trombones, a French horn, and behind this thicket, between the ghostly overtones, the ice-cold drum beat of Bauhaus’ “Bela Lugosi’s Dead” flickers throughout the second verse. Chilly Gonzales is on the piano. Band leader, Joel Gibb works like a graphic artist, he engineers meticulous sound-sculptures and collages whose exactitude stays concealed at first behind an aesthetic of extremely harmonious, yet also dreary, pop music.