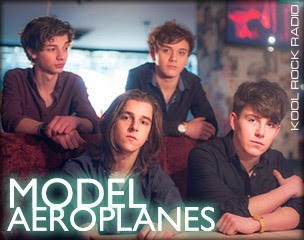 Comprised by Rory Fleming-Stewart (vocals, guitar), Grant Irvine (guitar), Ben Buist (bass) and Kieran Smith (drums), the lifelong friends have been playing music from the age of 13 in a variety of bands and formations, racking up experience in the field of songwriting, and shows. Now as Model Aeroplanes, they share a desire to make "fun, fresh and honest music that you can drink cocktails to."

With fantastic support coming from BBC Radio 1, the guys found themselves on the bill for BBC Introducing at T int the Park last year.

They have uploaded a handful of promising tracks to their Soundcloud page, such as "Crazy", their official debut single (released in September last year), "Innocent Love" and most recently "Electricity", and are currently recording their debut album.

With a very infectious and contagious guitar pop, they have been compared to bands such as Vampire Weekend, Theme Park and Bombay Bicycle Club, and have influences of disco, new wave and pop music. It's definitely another kool band to keep an eye on.

Below, you can wath a live session video of the band performing a new track called "Losing You".