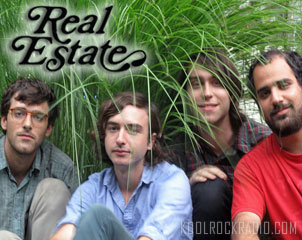 Real Estate was formed in Ridgewood, New Jersey in 2008. After issuing singles on the Underwater Peoples and Woodsist labels, the band's 2009 self-titled debut received critical acclaim. Tours followed supporting acts such as Girls, Kurt Vile, Woods, and Deerhunter. In 2010, Real Estate performed at the Pitchfork Music Festival in Chicago and the Primavera Sound Festival in Barcelona.

In 2011, Real Estate signed with the Domino Recording Company and on October 17th 2011 the band released Days, their second album and first for Domino. A coming of age moment for childhood friends Martin Courtney (Guitar and Vocals), Matt Mondanile (Guitar) and Alex Bleeker (Bass), Days was recorded over the course of five patient months in a remote New Paltz, NY barn-cum-studio with the help of Kevin McMahon (Titus Andronicus, The Walkmen).

Days sees the band tighten and refine their brand of timeless, melodic and genuine music- consolidating the breezy sketches of their earlier work into considered, graceful pop songs.

Several songs, like the album's rousing first single "It's Real" were written by Courtney in the way he wrote some of his first songs, laying out their architecture first on a bass rather than a guitar, allowing him to evolve the song's basic melody. Lyrically and melodically part of what makes Real Estate's music so vital are the moments where the disarmingly simple is made unexpectedly profound.