Foster The People Next Album Will Be 'More Evolved' 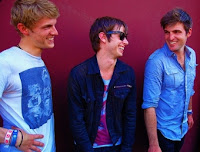 Foster The People frontman, Mark Foster, has revealed that his dance side-project will have an influence on the band's second album.

In an interview with Rolling Stone magazine, the singer/songwriter revealed that his Simms and Belle work with bandmate Isom Innis is helping to shape the sound of the follow up to the band's critically acclaimed Torches, he also cited West African music, David Bowie and the Clash as influences.

"It's all in there. We make a really heavily electronic hip-hop track and explore that world, [and] it's floating around in my brain the next time I write a Foster track. One thing about Foster the People is that it's taking pieces of a lot of different genres of music and kind of melding them together," he said.

"In the first record, I was looking at my vision for the project through a piece of opaque glass. This next record's going to be more evolved; it's going to be a clearer picture of what I've had in my head when it comes to that vision. Working on this project and getting deeper into electronic music is gonna help bring a deeper color in the next Foster record."