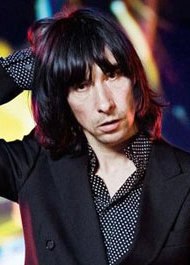 Primal Scream have revealed that they have completed their yet-untitled new album and will release it early next year.

In a recent interview, singer, Bobby Gillespie said: "It's a rock'n'roll record, but modern rock'n'roll. Pretty psychedelic rock, it's kind of guitar-driven but we use guitars in an orchestral way, not in the normal way people make rock records. I think we do it in a more interesting way. We weave the guitars in with electronics and other acoustic instruments to make the core sound."

"This record is really sophisticated in terms of the production, the instruments we've used and the arrangements. The songwriting has got better! Live we're a guitar rock'n'roll band but when we make records... it would boring if we just made guitar records, we've got our own way of doing things. It's Primal Scream music." He added.

Watch: Band Of Skulls "You're Not Pretty But You Got It Goin' On" Video

Band Of Skulls have unveiled the video for their new single "You're Not Pretty But You Got It Goin' On". The song is part of our regular rotation www.koolrockradio.com

The track is the fourth to be taken from the band's second album 'Sweet Sour', released earlier this year.

Tame Impala have unveiled the video for their new single "Elephant" taken from their forthcoming new album  'Lonerism' out Oct 5 AUS / Oct 8 UK / Oct 9 US on Modular Records. The song is part of our regular rotation www.koolrockradio.com

The psychedelic video was created by Yoshi Sodeoka. Watch it below.