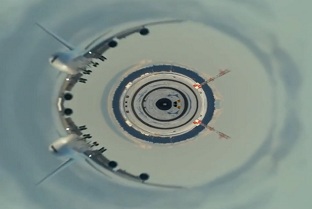 Melbourne synth punk/darkwave/minimal synth outfit mnttaB have unleashed visuals for his new single "Alison".
The song is taken from his new release 'This Friction', out today, November 16 through Detonic Recordings. Get it here.

Contrail or Chem-trail? Kaleidoscope or Rorschach? Its hard to tell until you get up close.
Watch/listen below. 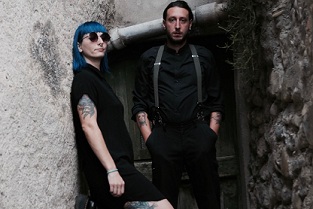 German post punk/coldwave duo Blaues Einhorn have unveiled their new single "Pariser Nacht".
The song is taken from their debut EP 'Nicht Essenziel', which will be available on November 26 through Her Majesty's Ship. Pre-order your copy here.

Pariser Nacht" is a cry in the quiet night of lockdown... An ode to the tumultuous life of our city of light!
Stream it below. 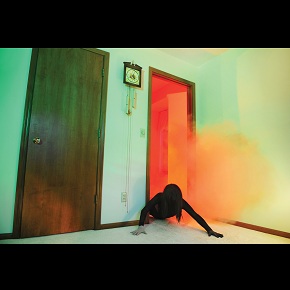 The follow-up to 2020's Perception is/as/of Deception, will be out on February 25, 2022 via Dais Records. Pre-order your copy here.

After a quarter century of nearly nonstop activity, ADULT. have perfected a strain of stylistic cohesion in the album format, “but for this we wanted something that’s falling apart.” Becoming Undone explicitly succeeds in this aim, simultaneously rejecting and reflecting the planetary discord that inspired it. Begun in the latter half of 2020 against a backdrop of unprecedented flux and seismic isolation, the duo kickstarted their muse by sourcing fresh additions to the rig: a vocal loop pedal for Kuperus and Roland percussion pads for Miller. Reconnecting with legacy influences like the politicized industrial percussion of Test Department and the queasy miscreant synthetics of TG’s 20 Jazz Funk Greats sparked a series of fruitfully frenetic sessions, centered on themes of impermanence and dissonance. Miller’s rationale is blunt: “We weren’t interested in melody or harmony since we didn’t see the world having that.”
From the tense technoid blitz of “Undoing / Undone” to the twitchy EBM of  lead single “Fools (We Are…)” and “I Am Nothing,” the sides bristle with strident acidic revolt and black leather sequential circuits, unhinged and unforgiving. Elsewhere, slower tempos of purgatorial unraveling (“Normative Sludge,” “She’s Nice Looking”) showcase a breadth of vocal FX, Kuperus sounding alternately indignant and possessed, decrying the crimes, fears, and failings of a deluded world. Throughout, the band’s chemistry crackles with revulsion and strobe-lit dissent, equal parts exorcism and denunciation. “Humans have always been pretty terrible,” Kuperus explains. “But every year the compromises of culture just accelerate.”
Becoming Undone is also freighted with a more personal pain, as Kuperus’ father passed away during the height of the pandemic, just before the album took root. As his hospice caretakers, she and Miller faced the banality of finality, surrounded by objects drained of meaning, “the joy of having a body, but also the drudgery of having one.” The record’s bewitching closing track, “Teeth Out Pt. II” – which happens to be the first ADULT. song in the group’s history without drums – speaks to this sense of doomed corporeal mass and the looming, lightless unknown that binds us all. A seasick haze swells and subsides in slow, low waves, flickering with ring modulation, above which Kuperus sings in a dazed, brooding, transcendent state, as if having finally glimpsed beyond the pale: “Some day / some day I will be silent and free / of this relentless gravity.”
Check out the album's tracklist and watch the video for "Fools (We Are...)", below. 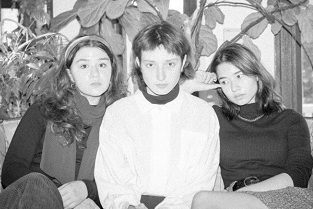 Chicago indie rock/noise pop trio Horsegirl have shared the video for their new single "Billy".
The 7" backed with a cover of the Minutemen's "History Lesson Part 2" is out now through Matador Records. Get it here.
On “Billy”, Horsegirl push their singular brand of innovative guitar music a step further, expanding their already enveloping wall of sound with three-part harmonies, swelling, overdriven guitars and unexpected tempo changes. Produced by the band and legendary producer John Agnello (Dinosaur Jr., Sonic Youth, Kurt Vile), the electrifying new track not only marks a significant evolution for the young band, but further solidifies Horsegirl as the exciting new bastions of alternative music.
Speaking about it, they say, “There was a period of last year where the three of us spent everyday together writing and recording. It was during this time, when we practically lived in Penelope’s basement, that ‘Billy’ was written. Penelope had recently read about Nick Drake’s alternate tunings prompting her to detune her guitar, while Nora overlaid a rhythmic vocal line detailing the life of a fictional character, Billy. At the time, we had been listening to a lot of New Zealand underground bands (80’s/90’s Flying Nun). With that scrappiness in mind, we worked the rest of the song out through improvising together, and ‘Billy’ quickly fell into place.
“‘Billy’ is our first release with a label, and it feels particularly special that it is with Matador, whom we have admired since we were young. After a year of hard work, we are very happy to finally share music, especially with those who have uplifted Horsegirl in the last year. We feel so thankful to have been able to record this song with John Agnello, who’s work we adore, at Electrical Audio, a Chicago institution. Recording this song was a dream experience for us, and John has become a very trusted mentor. 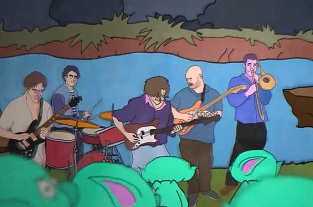 Brighton indie punk 7-piece KEG have premiered the video for their latest single "Farmhands".
The song is part of our current playlist and is taken from their debut EP 'Assembly', released last month (October 22) through Alcopop! Records. Grab your copy here.
Watch the animated video below.

A Place To Bury Strangers Announce New LP 'See Through You', Stream "Let's See Each Other" 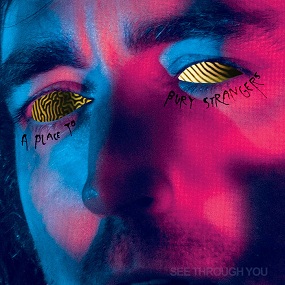 Brooklyn NY, post punk/psych band A Place To Bury Strangers have announced the release of their sixth studio album 'See Through You'.

The follow-up to 2018's album 'Pinned', will be out February 4, 2022 on the band’s newly former label, Dedstrange. Pre-order your copy here.

Outpacing even their own firmly blazed path of audio annihilation, this album repeatedly delivers the massive walls of chaos and noise that every A Place To Bury Strangers fan craves in spades. See Through You is an explosive journey which explores the listener's limits of mind-bending madness while simultaneously offering the catchiest batch of songs in the band's discography. It’s a nod of the cap to the art school ethos of the band's origins, while forging a new and clear direction forward. Simply put, See Through You is an epic, instant classic.
Check out the album's tracklist and watch the video for their new single "Let's See Each Other" below.
See Through You Tracklist:
01. Nice Of You To Be There For Me
02. I’m Hurt
03. Let’s See Each Other
04. I’ll Be Happy When You’re Gone
05. Dragged In A Hole
06. Ringing Bells
07. I Disappear (When You’re Near)
08. Anyone But You
09. My Head Is Bleeding
10. Broken
11. Hold On Tight
12. I Don’t Know How You Do It
13. Love Reaches Out

New Entry: Just Mustard Return With New Single "I Am You" 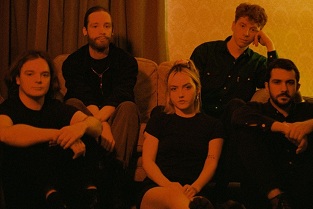 Dundalk-based post rock/shoegaze/noise band Just Mustard have returned with their new single "I Am You".

The song is out today (Nov 16) via Partisan Records. Get it here. 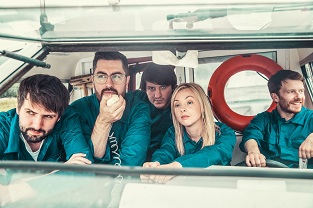 Dublin indie punk/alt rock band Silverbacks have released their new single "Rolodex City".
The song is taken from their forthcoming sophomore album 'Archive Material', which will be out on Jan 21st 2022 on Full Time Hobby. Pre-order your copy here.

Speaking about it, vocalist Daniel O’Kelly said:  “Rolodex City is about a property mogul who has fallen on very hard times during a period where technology has changed the way his business and people work. Similar to Butch Cassidy and the Sundance Kid getting caught out by the trains, bicycles and an increasingly small world, Mr Rolodex is running out of options. He visits a town in a barren landscape with the hope of flipping a bit of land, posing as whatever character the people there will trust - Rolodex City.
“Ultimately, our anti-hero has no luck and reluctantly ends his trip at a line dance led by Emma – feel free to join in!
“To help set the scene, we used a live drum sound and contrasting drum machine claps and mechanical percussion. The guitars are inspired by the twang of country music with some Verlaine techniques employed on the solo, for the riff spotters.”
Take a listen below. 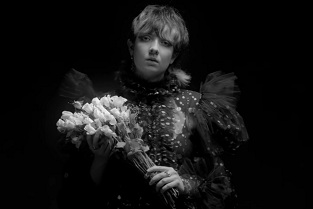 Glasgow post punk/synth/electronic five-piece VLURE have aired their new single "I Won't Run (From Love)", alongside an accompanying music video.
The song is taken from their forthcoming debut EP 'Euphoria', which will be out on January 14 through So Young Records. Pre-order it here.

From the band: “In order to have the wonderful people we know in our lives, we first have to learn to become vulnerable. This isn’t something that is inherently natural, we are animals at our core, or have been hurt in our past. If or when the time comes; instead of fighting the feeling, we stand our ground and let barriers fall, there’s something beautiful about the trust we have in one and other to allow friendships, partnerships and all other relationships flourish. It may come with age. It may come through growth. It’ll always be there, the chance of being hurt. Without that we will not truly feel alive.”
Stream it below. 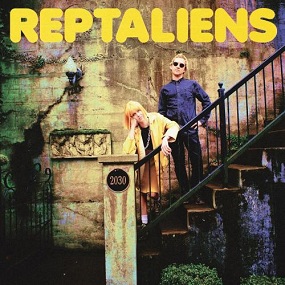 The self-produced record and follow-up to their 2019 album Valis, will be out on January 21st, 2022 via Captured Tracks, featuring their new single "Like A Dog". Pre-order your copy here.

Shelving the dreamy synths altogether and working without their other bandmates due to lockdown, Reptaliens reset, picking up their guitars and emphasizing the catchy attack that’s been there all along. Drawing inspiration from the spontaneous energy of the ’90s alternative canon, the pair hit a surge in momentum after a casual-turned-revelatory listen to Jane’s Addiction’s 1990 classic “Been Caught Stealing.” Without even aiming to make a Reptaliens song, they wound up penning the set’s lead single “Like a Dog,” a sun-soaked groove-bomb that’s blissfully unencumbered by sonic baggage. “That really kicked it off,” Cole recalls. “It was so fast and easy and fun that we said, ‘Let’s do more like that.’”
By contrast, and somewhat by necessity, Multiverse brings those lyrical concerns closer to home. “I didn’t get lost in these worlds like I normally do writing lyrics,” says Bambi. “It was way more reflective of the world around me.” And so past source material like cults and Stockholm Syndrome gave way to more immediate muses—like the pair’s frequent recording companion, a Labrador/pit bull mix named Hambone. Meanwhile, the music grew in a fresh direction, a jangle-prone timeless form of subtly psychedelic guitar-pop, finding occasional dark cul-de-sacs but ultimately tending toward the light and breeze.
Recording at home on the sleepy west side of Portland, with deer and woodpeckers regularly popping into their tree-lined backyard, the duo played all of the instruments themselves this time. The result is a departure that in fact only emphasizes the band’s melodic gifts. While Bambi’s distinctive bass-playing is more direct and driving, her airy vocals preserve Reptaliens’ soft-focus otherworldliness.