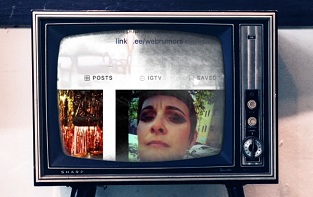 Aussie new-wave/80s alt-pop/synth artist Web Rumors (aka Em Burrows) has premiered the video for her new single "Human Commodity (We Like It)".
The song is out today (Feb 3). Get it here. 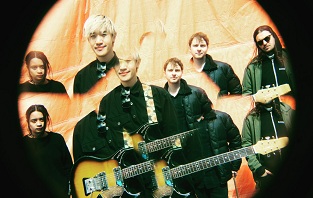 Canadian electronic/noise pop band Mother Tongues have released their cover version of Air's classic "Sexy Boy", featuring Asher Gould-Murtagh.
The song is out today (February 3) through Buzz Records. Get it here and stream it below.

Spirit of the Beehive Announce New LP, Stream "THERE'S NOTHING YOU CAN'T DO" 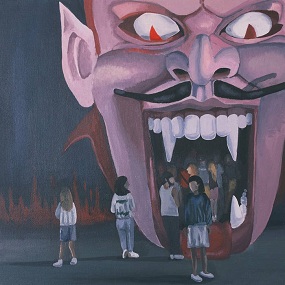 Philadelphia psych rock/alt Spirit of the Beehive have announced the release of their fourth new studio album 'ENTERTAINMENT, DEATH'.
The self-recorded/produced album and follow-up to 2018’s Hypnic Jerks, will be released on April 9th Saddle Creek. Pre-order your copy here.
Guitarist/vocalist Zack Schwartz and bassist/vocalist Rivka Ravede are now joined by new member Corey Wichlin, a multi-instrumentalist who relocated from Chicago to the band’s home territory of Philadelphia last year. In the spring of 2020, the trio began to write their new album at a distance by emailing files back and forth. “The process of making this album was basically the exact opposite of our experience creating Hypnic Jerks,” Schwartz explains. “We had to record that in seven days, because that was the studio time we had, whereas ENTERTAINMENT, DEATH was made over the course of three, four months.”
Though ENTERTAINMENT, DEATH doesn’t cohere in a single, unifying theme, the band samples old obscure commercials throughout, many of which guided the process of writing a song instead of serving as an appendage. Schwartz describes his songwriting process as a stream-of-consciousness, while Ravede asserts that she doesn’t typically write vocal parts with any specific intention in mind. “When I write, the narrative usually doesn’t present itself until after the song is done. And even then, it depends on how the listener interprets the words,” she reflects. Regardless of how dreamlike SPIRIT OF THE BEEHIVE’s lyrics can be, reality rears its head throughout ENTERTAINMENT, DEATH.
The album isn’t a metamorphosis, it’s simply the newest iteration of a longstanding project. “There’s a line in the Bee Gees documentary that I think applies to us. I’ll paraphrase: ‘We may not have always connected, but we always stuck around,’” Ravede says. Schwartz jumps in, “SPIRIT OF THE BEEHIVE: we’re still here.”

Check out the album's tracklist and watch the video for their new single "THERE'S NOTHING YOU CAN'T DO" below.
ENTERTAINMENT, DEATH Tracklist:
01. ENTERTAINMENT
02. THERE’S NOTHING YOU CAN’T DO
03. WRONG CIRCLE
04. BAD SON
05. GIVE UP YOUR LIFE
06. RAPID & COMPLETE RECOVERY
07. THE SERVER IS IMMERSED
08. IT MIGHT TAKE SOME TIME
09. WAKE UP (IN ROTATION)
10. I SUCK THE DEVIL’S COCK
11. DEATH

Email ThisBlogThis!Share to TwitterShare to FacebookShare to Pinterest
Etiquetas: Alternative, psych rock, Spirit of the Beehive 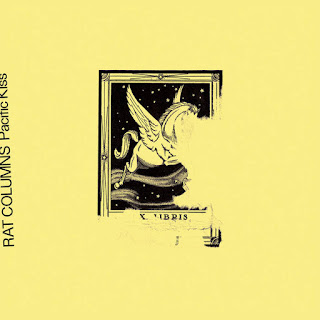 Australia-born/San Francisco-based musician David West (Total Control/Lace Curtain) guitar pop/dream pop project Rat Columns have announced the release of their fourth studio album 'Pacific Kiss'.
The -track record was engineered by Griffin Harrison and DW in New York City and Perth, and mixed by Mikey Young in Victoria. It will be out on February 12th via Tough Love. Pre-order your copy here
Pacific Kiss sees Rat Columns plunging headfirst into an azure sea of power pop, rock’n’roll and indie. The tones are bright and optimistic, though fans of confusion and gloom will still find solace in the album’s darker moments, of which there are a few. Is a record for those astral voyages into the spheres conducted from bedrooms, kitchens, grassy fields and open car windows.
Check out the album's tracklist and watch the video for their new single "I Can't Live On Love". 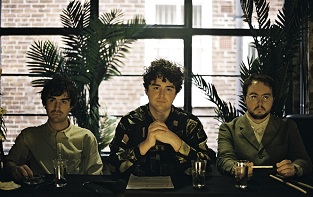 Leeds art rock/post punk band Mush have dropped their new single "Hazmat Suits".
The song is taken from their forthcoming sophomore album 'Lines Redacted', set to be released on February 12th 2021 via Memphis Industries. Pre-order your copy here.
“Hazmat Suits” arrives as a swathe of bug-eyed guitar lines cut with a pummeling rhythm section as primary songwriter, Dan Hyndman provides another tongue-firmly-in-cheek take on the dystopian landscape playing out around us.
"The concept for Hazmat Suits bizarrely predates the pandemic," explains Hyndman. "It then quickly became relevant and I retroactively rewrote some of the verses. I saw a group of guys in Hazmat Suits going into a building in Leeds town center around March, it was a really strong image that made me pick the tune-up again. It evoked a real modern dystopian vibe."
"Musically it's pretty riffy and it’s one of the few tunes on the new record Ty had a hand in writing prior to his passing.  It’s got some cheesy danceable 90’s vibes too which is always fun and our zaniest guitar solo to date. Nearly a year away from its conception it possibly feels a bit on the nose to release a tune called Hazmat Suits but at the time it was kinda prescient. That’s our excuse anyway."
Stream it below. 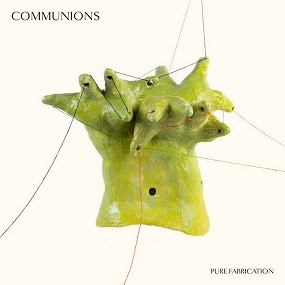 Danish post-punk/guitar band Communions have announced the release of their sophomore album 'Pure Fabrication'.
The 15-track album, produced by Mads Brinch Nielsen, will be out on April 23 via Tambourhinoceros. Pre-order your copy here.
In their sophomore album of Odyssian size and scope, Communions weave an intricate tapestry from “cultural debris”. While Pure Fabrication follows the arc of a reverse coming of age story, Communions’ Rehof brothers have arrived at a point of bold artistic maturity.
“While the blueprint of the coming of age story traditionally involves a protagonist who enters the world seeking answers and emerges renewed, with newfound maturity, Pure Fabrication reveals that growth is tricky and may come at a price. The journey into the ‘real’ world only complicates and fractures any vague sense of clarity that one might have had to begin with.” - Martin Rehof
“Pure Fabrication can be understood positively, hinting at the fact that our lives are fabrications that we weave on the basis of desire and freedom. Or, more negatively, it can be taken to mean that the stories we fabricate around ourselves and use to understand our lives are in themselves only mere fabrications—myths or worn out templates that we constantly reproduce, and which perhaps ultimately conceal the powers of whatever is actually pulling the strings, whether that be other people, an underlying culture, or some metaphysical goddess in the sky. The lyrics function as kaleidoscopic mixes of different myths woven together. In this sense, Pure Fabrication can also be understood as a meta-reference to the use of mythic material itself; to all of the ‘cultural debris’, if you will, that gets processed over and over again in new and different ways, as it does here.”
Check out the album's tracklist and watch the video for their new single "Bird of Passage", below.
Pure Fabrication tracklist:
01. Bird Of Passage
02. Humdrum
03. Cupid
04. My Little Planet
05. Learn To Pray
06. Signs Of Life
07. Splendour 04:16
08. History (The Siren Song)
09. Blunder In The Street
10. Is This How Love Should Feel?
11. Hymn
12. Androgyny
13. Here And Now
14. Celebration
15. The Gift Of Music 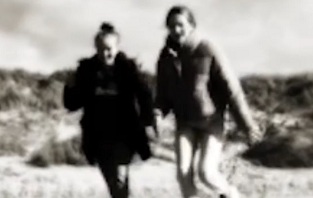 The song is part of our current playlist and is taken from their recent album 'Zombies', which came out in December 2020 through Reptile Music. Get your copy here.

The video was filmed by Christian Klepp live in Berlin 2017. Watch it below. 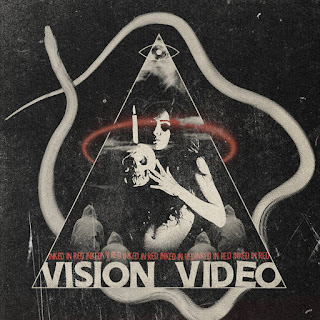 Athens, GA post-punk/goth/new wave band Vision Video have announced the release of their long-awaited debut album 'Inked in Red'.
The album, recorded with producer Tom Ashton of the classic 80s goth band, The March Violets and  will be released on April 16th via Kindercore Records. Pre-order it here.
Speaking about it, Dusty Gannon says: "The record is a ten track story of mental health destruction borne of human mortality and government incompetence. It is as personal a thing for me as I have ever made, and can't wait to share this and commiserate with you."

About the new single "Static Drone", Gannon adds, "I wrote this song in the middle of some intense manic episodes where my mental health had completely unraveled. There was this peculiar month-long period of time at my fire station when we were dealing with a death almost every shift, and it was mirroring my internal sentiment that I was beginning to feel like everyone was tragically fated to die alone."
Check out the album's tracklist and watch the video for "Static Drone", below.
Inked in Red Tracklist:
01. In My Side
02. Comfort In The Grave
03. Inked In Red
04. Static Drone
05. Siren's Song
06. Organized Murder
07. Broken Fingers
08. Run
09. Kandahar
10. Agent Orange