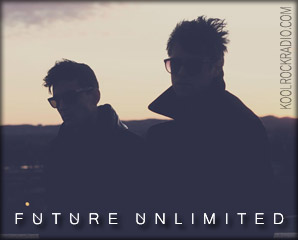 Future Unlimited are a synth-pop 80's flashback duo comprised by David Miller and Samuel D'Amelio. The pair found common ground in Nashville, TN when comparing their love of new-wave, no-wave, and post-rock from three decades prior.

For Future Unlimited, the 80's is not merely a by-gone era; to them, it is a mindset and a structure which makes sense. "It is our inspiration, we live it" says David. "We annoy each other quoting movies from it. And...we know the songs inside and out."

David Miller relocated from New York City's East Village neighborhood to join a band in Nashville. One night, he had an encounter with his downstairs neighbor due to a noise complaint. That encounter would lead to meeting his writing partner in Future Unlimited, Samuel D'Amelio, an up-and-coming DJ in Nashville. Realizing their common interest in classic punk, 80's no-wave, post-punk and everything in-between, the two ultimately formed a friendship and musical bond that serves as the core influence in their music.

Their new single 'Lightweight Eyes' it's been a favourite here on Kool Rock Radio since its released in July. They are currently working on new material.

**Their song "Golden" was featured as Single of the Week here on Kool Rock Radio from February 13 to april 20.