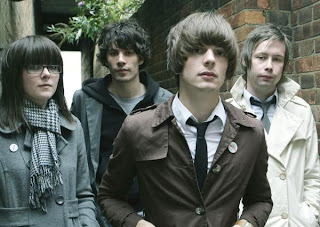 The Answering Machine have announced they have split up.
The Manchester band, who formed in 2005, told fans in a handwritten letter via their website the reason for the split.
The letter read: "Over the last week or so we’ve been doing some soul searching. We are very sorry to have to tell you that we have decided to stop making music as The Answering Machine. We'd like to thank every single one of you for coming to our shows, buying our records and supporting our band right up until this point."

"It obviously hasn't been an easy decision for us and we don’t want to make things harder/more upsetting for us by doing a 'farewell tour' or a 'last ever gig'. We are happier bowing out on the positive note we started on six years ago''
The band continued, saying that they have decided to release a special 12-inch vinyl edition of their second album ‘Lifelines’.
"That said we’d still like to do something special as both a mark of respect to you guys for being there with us all the way. So, we will be releasing 'Lifeline' (our second album) in a 12inch vinyl very soon as a goodbye and a celebration of all that we’ve achieved."
The Answering Machine's debut 'Another City, Another Sorry' was released in 2009.