Mumford & Sons To Involve Fans On Their Next Album 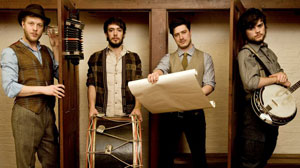 Mumford & Sons have revealed that they would love to involve their fans on their next album.

The band, who picked up Best British Album at this year's BRIT Awards, have said that the follow-up to 2009's 'Sigh No More' will have a live sound feel.
''We really love the idea of involving our audiences in some way. That's how we did 'Sigh no More', Ted Dwane told.
He added: ''We did it live, the songs were played in front of crowds, they evolved in front of an audience. We're quite intent on doing that again fro the second album. It feels like a logical way to work out what you want to record.''
Meanwhile, Mumford & Sons have become the first band since Coldplay to sell over a million copies of an album in the UK and US.
Publicado por KOOL ROCK RADIO en Friday, March 18, 2011 No comments: