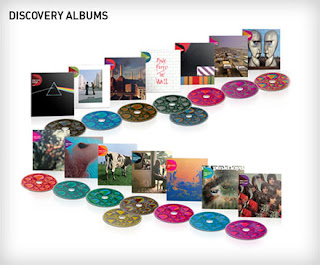 As part of deal with EMI...

British music heavyweights Pink Floyd have announced they will be re-issuing remastered versions of their 14 studio albums starting on September 26th and running through to February next year.

The 'Why Pink Floyd?...' releases form part of the bands' recent agreement with EMI and will include CDs, DVDs and a brand-new single-album ‘Best Of’ collection.

Roger Faxon, CEO of EMI Group, said: ”This is a unique collaboration between EMI and one of the most creative and influential bands in history.”

The legendary band, who are still one of the most successful and iconic artists of all time, recently signed an agreement with EMI which has allowed the development of a multi-format programme of packages, many containing archive material that has been collated during an extensive process between EMI and Pink Floyd for a range of media formats

The first release will be an expanded deluxe and special edition version of Pink Floyd's 'The Dark Side Of The Moon' on September 26.

On November 7, the band will release the new retrospective 'A Foot In The Door - The Best of Pink Floyd'.

And on February 27, 2012 'The Wall' - ‘Immersion’ and ‘Experience’ editions, Vinyl LP and digital editions will be released.

In January, Pink Floyd signed a new deal with EMI after ending a legal battle with their record company.

Further info about the releases can be found at the site whypinkfloyd.com where you can also pre-order the albums.
Publicado por KOOL ROCK RADIO en Tuesday, May 10, 2011 No comments:

Morrissey has revealed to fans that work on his new studio album is over, despite not having a record label to release it on.

Writing to fans, the singer explained that the material is "ready" despite not being signed to a label. "The follow-up to (2009's) 'Years Of Refusal' is ready and fluttering wildly against the bars," he explained. "There is still no record label and the years shuffle like cards. My talents do not lie in DIY."
The full statement deals with the way his comments on the Royal Wedding were reported. Interviewed by Radio Four, Morrissey explained that the Q&A session was heavily edited by the BBC.
"If my interview sounded chopped and cropped, that's because it was," he wrote. "I had spoken fluently about the royal dreading, but an Iranian censorship confiscated all of my views. It is distressing, but in all manner of British media in 2011 we are only allowed to hear the same old thoughts and feelings expressed over and over and over again."
Morrissey will tour the UK and Scandinavia in July.
Publicado por KOOL ROCK RADIO en Tuesday, May 10, 2011 No comments: