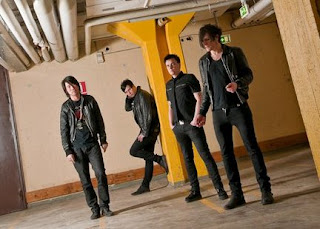 The Exploding Boy is one of the most talked about Swedish alternative pop/rock bands in the whole of Europe, were the band got amazing reviews for their previous album 'Afterglow' (2009).
The band followed up the release of 'Afterglow' with more than 30 live shows in Germany alone. The singles 'London', 'Heart Of Glass' and '40 Days', from the above mentioned album; all climbed up to top 10 on the official German alternative chart (DAC).
'The Black Album' is the band's third full length release. The album was preceded by the digital download 3-track single/EP called The Human EP on April 15. The first single from the album is a double A-side release (only digital) with the songs 'Human' and 'Torn'. A third song was added to the single to show the broadness of the band. All three songs can be found on 'The Black Album'.

**The Exploding Boy reached the TOP 10 of Kool Rock Radio's "Best New Bands" list in 2007 and their single 'Shot Down' was also included in the TOP 10 "Best Tracks" the same year.
﻿
Publicado por KOOL ROCK RADIO en Sunday, May 01, 2011 No comments: