DETACHMENTS Band Of The Month for September on Kool Rock Radio 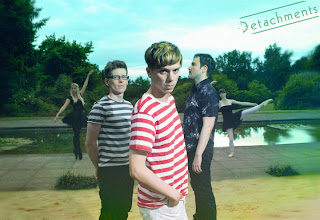 Detachments was the BEST NEW BAND for Kool Rock Radio in 2009 and their singles 'Circles' and 'The Flowers That Fell' were both number 1 in our Annual Chart the same year. And now this album debut could also be The Album Of The Year for 2010, an amazing record that transports you to the best part of 80s' decade, with this particular touch of new wave bands of late 70s'.

Detachments appear to be focused in the sounds of 1979 to 1982 to create this album, they have taken the best of Simple Minds, Kraftwerk, Joy Division, Devo, Blancmange, Mi Sex, Cabaret Voltaire, Gary Numan, New Order, Heaven 17, John Foxx, Ultravox, Wire, The Human League among many others.

The Album is ABSOLUTELY BRILLIANT 9/10, the more you listen it, the more you fall in love with... This is how the new Cold Wave should sound.

This enigmatic debut album of synth pop noir from Detachments, some two years in the making, more than distinguishes the band from their contemporaries. The promise and intrigue in the potent jagged Detachments sound that drew such creative luminaries as Andrew Weatherall, Trevor Jackson and Tim Goldsworthy to work with the band has been fully realised here.

Working in tandem with Simian Mobile Disco’s James Ford, the bands creative force Bastien Marshal has delivered an album of eleven tracks that belie any comparison with contemporary artists or bands. The eleven tracks included illustrate the Detachments ascendance to a pure synth group.

Culled from almost 40 songs, Bastien and Ford worked day and night over a ten-day period at Ford’s Hackney studio in the bitter snow-dusted cold of late February 2010 (our coldest in some 40 years) an experience which brought to mind the bleakness of Berlin in the midst of winter, a well trodden destination of Bastien’s. It was this punishing schedule, a hallmark of any album produced by James Ford, which inspired Bastien creative vision for Detachments.

The mutual love Minimal Wave and also the sonic experiments that emanated from the BBC Radiophonic Workshop informed the decision to fully utilise the vast array of Ford’s vintage synth gear. This direction finessed the sound that seeps through every pore of their album.

This is a sound that always seemed deep lying in the Detachments DNA but is only fully realised here. During Bastien’s time in the critically acclaimed, post electro clash group R3mote, Andy Weatherall would pick out random tracks from the Cold Wave era and point out the similarities. Later Trevor Jackson would brand Detachments as “Cold Wave” a telling portent given where the band has sonically arrived. And how did they finally arrive at this cold wave sound? Eschewing the digital studio processes that plague modern music and seeking inspiration in the 80s analogue synth experiments – taking their cue from Minimal Wave and personal, all-time favourite European bands from the late 70s early 80s, whose influences were aligned with the Detachments – namely Human League, Fad Gadget and Cabaret Voltaire.

Other studio techniques used during the recording process included tape manipulation, on tracks such as “Sometimes” which achieve a sheer density of sound last heard on Gavin Russom’s superlative Black Meteoric Star album. Whilst on the subject of contemporary musical allies, Ford’s distrust of digital technology when knee deep in production can be likened to ex Dissident visionary Andy Blake and his passionate disregard for the mp3 format. Recognizing him as a kindred spirit, Blake was asked to provide a remix of “Holiday Romance” with the resulting 18-minute reinterpretation nothing short of stunning. Iconic producer Martyn, another contemporary figure to have brilliantly reimagined Detachments (“Circles” as featured on his Fabric mix) can be viewed as a further modern day influence with Bastien recognizing the Dutchman’s refusal to stick with the parameters of dubstep.

It’s not only the music of Cold Wave that struck a chord with the band though. Anyone who has heard Detachments’ ‘H.A.L.’ will have sensed unrest in the Orwellian themes that course through the lyrical veins. Thus it’s no surprise that Detachments could also relate to the socio political undertones that characterised the main groups of the cold wave movement.

Of course there’s plenty of other influence at play in the lyrics. “Audio Video” a celebration of technology and the limitless freedom of the internet, with furtive sideways glances to those masters of the macabre, Edgar Allen Poe and Irvine Welsh in glimpsing the vacuum of cyberspace and the reliance on sanctuary in technology.

Beneath the staid kick drums and gurgling synths of “I Don’t Want To Play” lie black humoured, Mike Leigh and Pinter-esque asides on status anxiety and the vulgarity of people disregarding their beliefs in the crude aspiration to impress the neighbours. Examples such as these demonstrate Bastien’s ability to lyrically draw on his own experiences and add substance via cultural references that resonate with his way of thinking.

The fear of being institutionalised into the 9 – 5 grind that unfolds on “Circles” relates to Bastien’s own experience in the marketing team for a high end London surveyor. The desire to escape the rat race, this descent into passively forgoing any sense of identity could be classed as social suicide -- leaving the sanctity and safety of the nine to five for the sake of his creative self – but how many of us have the strength of conviction to take that step? The track itself grooves with an edgy intensity before suddenly pausing. The sudden break and ascension towards the sonic unknown in the tracks closing moments makes for a powerful, transcendental refrain – conjuring a sheer intensity and textural sublimity that is reminiscent of the mighty My Bloody Valentine.

Elsewhere you can point to the feelings of bleakness Bastien endured as a youth in hometown Blackpool, in winter - a ghost town by any other name, as another point of lyrical influence. That coupled with the disappointment at old friends’ acceptance of being sucked into the rising dominant class, the parochial, often slightly uncomfortably right-wing, conformist, workers that litter the offices of Anytown or indeed The City as demonstrated on “You Never Knew Me” which pulsates with a venomous energy.

Deeper into the album lurks “Fear No Fear” as the dark, throbbing heart of this record, a black hole at the core of a galaxy - sucking in all light whilst in parallel – hurtling through the extremities of deep space. It’s certainly not all heavy though, you can contrast the simmering Orwellian themes that play out in “HAL” with “Art Of Viewing” as Bastien muses about appropriating Cold War psychic spying technology for his own romantic means. It’s this perversely black approach to humour that runs through quite a few of the album’s tracks.

This dark humour translates to the strikingly retro album artwork, naturally composed by Bastien. Closer inspection unveils the presence of eleven skull-faced cheerleaders – perhaps one for each song – a sly nod to German philosopher Herbert Marcuse whose ethos that intellectual and economic creativity and productivity are channelled through the consumption of largely irrational and wasteful leisure pursuits is intrinsic to the Detachments worldview. There are moments that touch on gleaming pop too, with lead single “Holiday Romance” detailing the internal, mini-drama of pondering your recent ex’s vacation activities. The accompanying video from respected director Stephen Agnew displays the bands penchant for the odd pop culture references by paying homage to French new wave classic A Bout De Souffle – coincidentally the 50th anniversary of the film.

It’s worth noting that “Tread Along” the albums most hauntingly beautiful moment should be the bitter sweetness of anaesthetizing the pain of lost love, escaping into an opiate haze deep in the unidentified countryside of the imagination. “Words Alone” is the closing moment of release and atonement with its soaring symphony of synth strings soulfully imbued with positive vibes.

Ultimately, the 45 minutes that documents the eponymous ascendance of Detachments as a pure synth group brilliantly exposes your senses to themes of romanticism; nihilistic tendencies; lost love; opiates; Cold War psychic spying; Orwellian paranoia; transcendentalism; the garishness of social climbing and mundanity of office politics. That the majority of these songs sweep through such matters in less than four minutes only serves to demonstrate the raw power of the Detachments vision.
Publicado por KOOL ROCK RADIO en Wednesday, September 01, 2010 No comments: