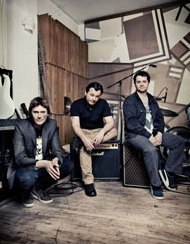 Manic Street Preachers have revealed that they won't be releasing anymore singles.

In an recent interview bassist Nicky Wire said: "I think for a certain incarnation of the band it is a sort of end. I dunno if we'll be releasing singles again. The way everything in the music industry has changed, for an old guitar band like us to be bothering the charts seems somehow quaint."

He added: "It's definitely not the end of the band, we're still in love with each other and the notion of one final re-invention. We're trying to think of a final third way.''