Caged Animals have unveiled the video for their new single "Cindy + Me", out on 17th June via Lucky Number, ahead of a new album later this year.

About the song, Vincent explained: "Cindy + Me’ is my attempt at capturing some sinister version of the adolescent dream. It's an outlaw love song, based around a sample from synthesizer-pioneer Raymond Scott's 'Cindy Electronium.' In the song, I'm a crazed teenager in love, running away from home with the girl and some twisted view of the future. We've got her father tied up in the house, a smoldering corpse, we've got the cash, "We're living on top of the world," and we're going to get away with it.”

The video, featuring Vincent Cacchione, Magali Charron and the baboons: Jack, Janet, Jonas, Jojo, J.Lo and Jeremiah in the leading roles (pls take it seriously), was directed by Carlos Lopez Estrada. Watch it below.

Norfolk, VA dream pop solit Suburban Living aka Wesley Bunch just released the video for his latest single "Always Eyes", taken from the 7" of the same name, out now via Dialog Records.  The song is part of our current playlist www.koolrockradio.com.

Check out the VHS music video/collage directed by Wesley Bunch below.

The Maccabees Confirm They're Working On New Album 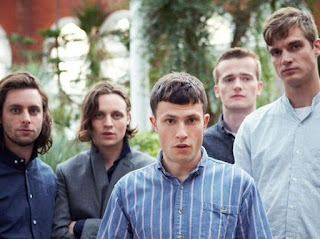 London indie band The Maccabees have confirmed that they are back in the studio working on their fourth album, the follow-up to 2012's Given To The Wild, and revealed that they hope to get it finished by the end of year.

"We went straight back into our studio in Elephant & Castle at the end of last year. We spent time doing it up too - I was painting the kitchen."

"We had such a busy time after 'Given To The Wild' and to feel excited enough to get on with a new album straight away must mean something."

Guitarist Felix White also discussed how the album is going to sound, and his big hopes for the record, "It's going to be sort of similar to Given To The Wild, but it's also going to be more direct and exciting. I think it's going to be our best record."

Given To The Wild was released in January last year, reaching number four in the UK Albums Chart.
Publicado por KOOL ROCK RADIO en Thursday, May 30, 2013 No comments:

California indie-pop band Cayucas have revealed the video for their latest single "East Coast Girl", taken from their recently released debut album 'Bigfoot', out via Secretly Canadian. The song is part of our current playlist www.koolrockradio.com.

The video was directed by Steven Andrew Garcia. Watch it below.


Get your copy of 'Bigfoot' now on iTunes.

Philadelphia-based multi-instrumentalist Dave Hartley aka Nightlands, has shared the video for "To The Moon", a new song that he wrote for a specific scene in Stanley Kubrick’s 2001: A Space Odyssey.

About the song Hartley says: "The song is meant to evoke a feeling of isolation and loneliness, but also wonder and innocence – a remembrance of a time when the moon above was an invitation and a gateway to the stars."

The video was directed by She Policeman and will take you on a psychedelic trip to the moon, most of the footage is NASA lunar expeditions. Watch it below.

Suede have unveiled the video for "Hit Me", the latest single taken from their critically acclaimed new album 'Bloodsports', released in March. The song is part of our current playlist www.koolrockradio.com.

The video shows destruction and reckless vandalism inside a museum. Watch it below.

You can buy the single's radio edit and it's attendant b-sides on iTunes.
Publicado por KOOL ROCK RADIO en Thursday, May 30, 2013 No comments: