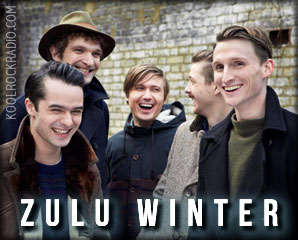 Zulu Winter are a five piece Indie rock band formed in London in 2011. The band consist of Will Daunt, Iain Lock, Dom Millard, Henry Walton and Guy Henderson. Having played together since they were 15, they've overcome all manner of music industry adversity to get to this point. "I've never even considered anything else," Henry admits. "Playing guitar with these guys is all there's been."

Eventually they went with Kaiser Chiefs, Cribs and Crystal Castles manager James Sandom. "The thing we love about James is that he takes a band at face value, and says 'you are what you are and I'm going to make you as successful as you can possibly be'."

They released their first single "Never Leave" on Double Denim Records on 7 November 2011. Their second single "We Should Be Swimming" was released in February 2012 on PIAS. The band have also received features in the UK press. In March 2012, the UK Band, Keane, announced Zulu Winter as the support act on their 2012 UK tour. The band released their third single "Silver Tongue" last month.

Zulu Winter are due to release their debut album "Language" packed with syncopated dance beats and punchy, melancholic pop on the 14 May 2012 on Play It Again Sam Recordings.