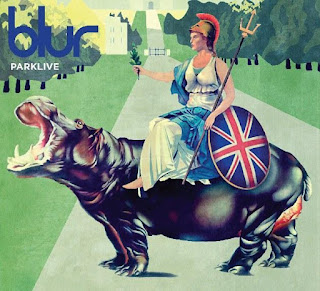 Blur will release their Hyde Park gig, part of the closing ceremony of the 2012 London Olympics, as a 5 disc CD/DVD 'Parkive' on December 5th.

Titled 'Parklive', the deluxe edition will comprise the whole show, with extras, presented in best-quality audio over 2 CDs with a DVD of the 12-camera shoot directed by Mathew Amos. Also included is an exclusive CD, 'Blur - Live At The 100 Club' recorded at the legendary London venue in August as part of Converse Represent, with a further CD of special live tracks recorded this summer, including 'Under The Westway' and 'The Puritan' performed live on Twitter from a London rooftop, and recordings from the Wolverhampton warm-up show and BBC Radio Maida Vale sessions.

The discs come housed in a 60-page hardback book containing exclusive photographs from both Hyde Park and the 100 Club and is available from blur.co.uk

Plus, if you pre-order the Parklive Collectors' Edition before midnight GMT TONIGHT your name will be featured in the book.