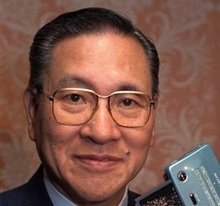 Former Sony president Norio Ohga, who helped transform the music industry with the development of the compact disc format, has died at the age of 81, the company said.
The invention of the CD arguably saved the music industry. Under threat from home taping, record labels struggled to find a way to reinvigorate their back catalogues and inject investment into new talent. Pioneered by Sony, the CD sent sales to record levels. Famously billed as being virtually indestructible - can you really smear jam on them? - the CD soon became the primary means of listening to music.
Sony engineer Norio Ohga led this change. President of the Japanese company from 1982 to 1995, Ohga actually began life as an ambitious young opera singer.
Drawn into the world of engineering, Norio Ogha soon focussed this ambition on new technology. When discussions about the possibility of the compact disc began, it was Ogha who insisted that the CD should be 12 cm in diameter - enough to safely carry Beethoven's Ninth Symphony.
Later, Norio Ogha would preside over the purchase of the Columbia label and also launched Sony's games division - who would in turn produce the Playstation.
Commenting on the loss, Sir Howard Stringer, Chairman, CEO and President, Sony Corporation said, "When I first joined Sony in 1997, Ohga-san was serving on the frontlines of Sony management as Chairman and CEO. His numerous and successful endeavors were well-known both inside and outside of Sony. Witnessing Ohga-san's leadership firsthand was truly an honor, and one I continued to enjoy and benefit from in countless ways in the years that followed."
"By redefining Sony as a company encompassing both hardware and software, Ohga-san succeeded where other Japanese companies failed. It is no exaggeration to attribute Sony's evolution beyond audio and video products into music, movies and game, and subsequent transformation into a global entertainment leader to Ohga-san's foresight and vision."
"I offer my deepest condolences on his passing and pray that he may rest in peace."
Publicado por KOOL ROCK RADIO en Monday, April 25, 2011 No comments: